Over the last month, the Credit Suisse Crude Oil Shares Covered Call ETN (USOI) is down by over 12% in a move which has brought prices of the ETN to some of the lowest levels seen this year. In this piece, I will dig into the underlying mechanics of the ETN and show that even if fundamentals were bullish (which they aren’t), USOI is a really bad way to invest in crude oil.

When you examine an ETF or an ETN, it makes a lot of sense to spend some time digging through the prospectus to get an idea of what you’re actually holding. Once you get a firm grasp of the methodology and holdings of the instrument you’re looking to buy or sell, you can then examine the underlying fundamental and technical factors to understand how the instrument is likely to perform under a variety of market conditions.

At first glance, USOI sounds like a really interesting instrument. The ETN essentially offers dividends to the holder of the ETF in the form of a covered call strategy based on the USO ETF. Specifically, the strategy gives the return as though you were holding the USO ETF and selling call options to earn ongoing income in exchange for putting a cap on price appreciation in a given month. This ongoing form of dividend likely has appeal for a number of investors, but we really need to break down the individual components to figure out what’s actually happening here.

First, let’s talk about the fact that this is a covered call strategy. This strategy essentially sells options that are out of the money by about 6% on the USO ETF and returns the premiums received to investors in the form of dividends. At first glance, this sounds great… I mean, who doesn’t want dividends, right? But the problem comes when you realize that this is essentially capping your upside in an instrument which trends based on large-scale fundamental changes in the supply and demand dynamic of crude oil. In other words, selling your upside in crude oil in and of itself isn’t that advantageous to investors looking to be exposed to crude oil.

Next, there’s the little wrinkle of roll yield. Since this strategy follows USO, investors are likely to significantly underperform the actual price return of WTI as long as the market remains in contango due to roll yield. Roll yield is the return attributed to the fact that when you are holding futures positions across several months, contracts in the back of the curve tend to trade towards the front of the curve. This phenomenon results in losses if the prices in the back of the curve are above the prices in the front of the curve (contango) and results in gains during the opposite setup (backwardation). The crude markets have been caught in contango for most months for a very long time. In the following chart, I’ve overlaid a simple indicator showing when the market is in backwardation and when it is contango for the last 5 years. 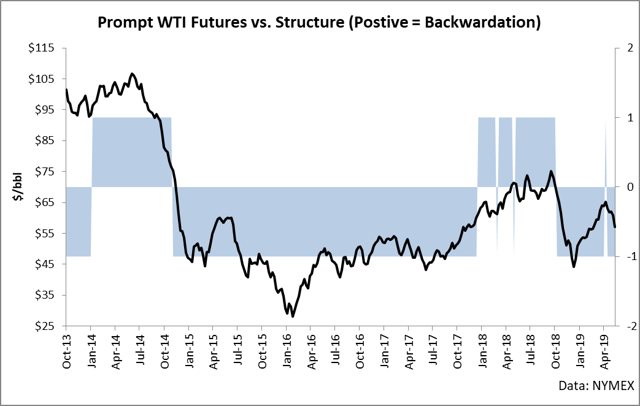 With a few exceptions, the market has largely been caught in contango. Specifically, for the past 10 years, WTI futures have been in contango in 78% of all months. What this means is that during these months, USO underperformed WTI due to the drag of negative roll. In the following chart, the extent of this drag can be seen by comparing the price return of WTI versus the price return of the USO ETF. 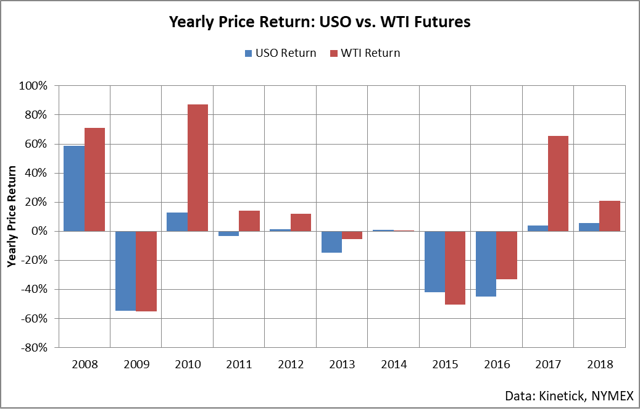 In the last 11 years, USO has underperformed against WTI in all but three years. This is the inescapable fundamental reality of trying to track a futures market on an ongoing basis and unfortunately for holders of USOI (which tracks USO), this is bad news. What’s even worse for holders of USOI is that the structure of the ETN sells off the topside during periods in which USO rallies which virtually guarantees underperformance.

These two factors (selling the upside and a negative roll) are structural issues which make the USOI ETN a bad hold in most market environments despite its nearly 10% yield. This said, we can look at the immediate fundamentals of crude oil to glean insights into where oil is likely headed.

The fundamentals of crude oil are bearish. The starting place of all fundamental analysis for most commodities should start with a seasonally-adjusted range of inventories to understand where we stand versus historic averages. 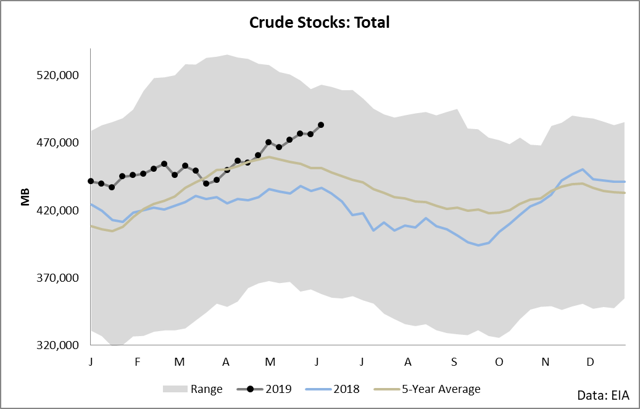 Crude oil is going to be very hard-pressed to salvage any sort of bullish thesis for this year. Crude stocks have continued to climb in a time of the year in which they typically fall largely due to two key factors: refining runs and imports.

Refining runs have been exceptionally weak this year due to a variety of factors and current margins have weakened versus recent highs which indicates that refining demand is likely to remain subdued for some time, despite the fact that we are in the driving season. 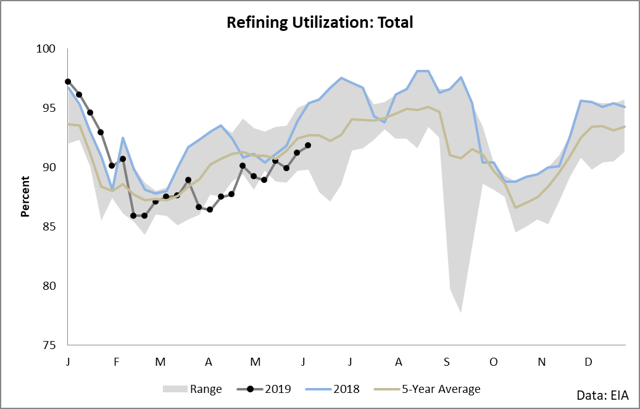 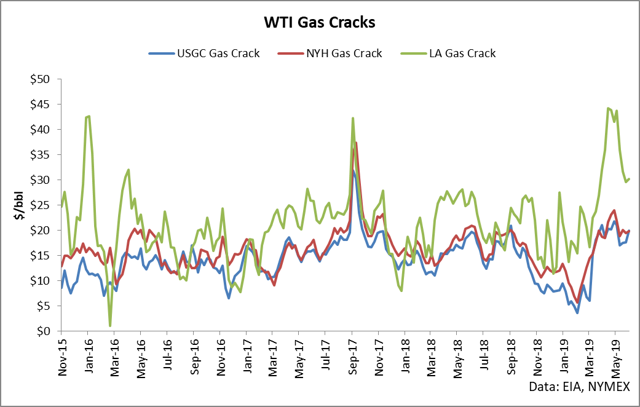 Imports have been extremely low for the majority of the first part of this year (which was likely the driver of the run-up in crude pricing), but that trend has switched around the time that crude oil peaked in late April. 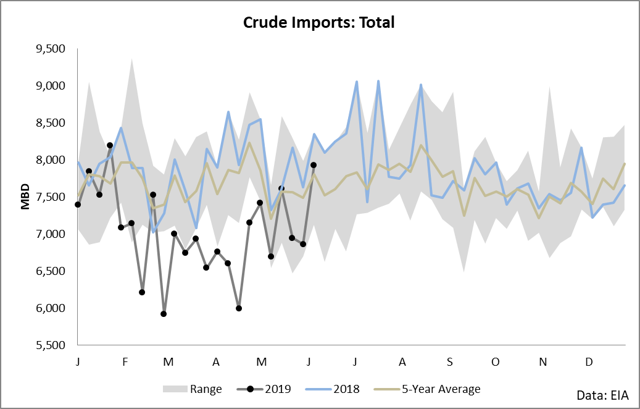 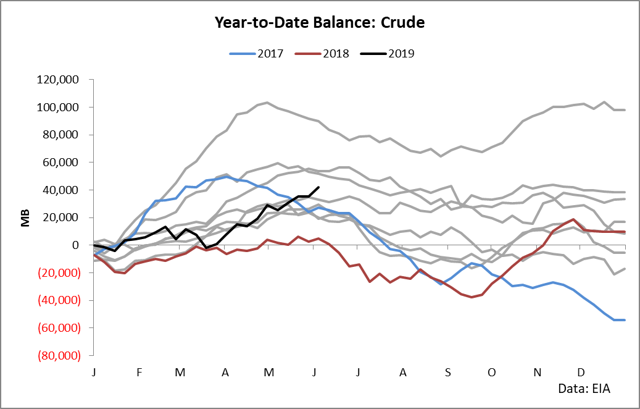 The only substantial fundamental development on the horizon is the OPEC meeting in July and it is all but certain that OPEC will maintain the cuts to continue to try and hold up the market. Unfortunately, the United States has seen a resumption of imports back to nearly the high of the 5-year range with OPEC cuts already in force, which means that unless additional cuts are brought to bear, little will change in the supply and demand balance. The only wildcard to this thesis would be a substantial cut in U.S. supply which would bring inventories down and prices up, but this would likely take a few months to occur and the EIA is expecting consistent growth in production through next year. In other words, crude oil is really bearish right now and any sort of long trade in this environment trades against the fundamental forces at work.

The USOI instrument is a really bad way to gain exposure to WTI. As an instrument which tracks USO and sells its upside through a covered call strategy, it is exposed to consistently negative roll yield and rallies in price are cut short. The fundamentals are bearish and price of USOI is likely to head lower in the immediate future.