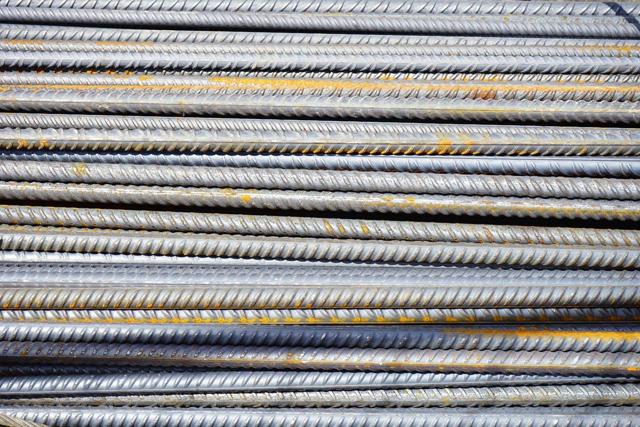 The U.S. steel industry has been in a rough patch since the crash in housing development in 2008. Most steel companies trade at less than half the price as they had during their peak in 2008. Chinese demand for steel has slowed drastically, and ongoing global manufacturing slowdown has created extreme pessimism in the industry.

I believe that the current economic slowdown and trade spats will begin to impact other parts of the economy like technology and healthcare, while the primary sector like steel and energy will undergo a reprieve. Demand for steel in the U.S. is likely to grow as the country begins to replace dilapidated buildings and infrastructure. I have previously written at length about my demand expectations for homebuilders (ITB) and automotives (CARZ), and my thesis (which has worked out profitably thus far for both) is nearly the same for steel.

Investors have been very fearful to put their hands back into companies and industries that performed the worst in 2008. Most notably, financials (XLF), builders, car manufacturers, and commodity producers (XLB). It is sensible for investors to be cautious following the widespread mass casualties in these sectors, but today this fear has only led to extreme discounts.

Quite frankly, it seems like investors have been pouring money head over heels into the few sectors that did not crash in 2008 like utilities, consumer staples, and healthcare. In my opinion, this has created a huge valuation disparity that has caused most investors to miss out on great long-term investments like steel.

Though I expect U.S. steel demand to be very strong, I also expect global demand to rise everywhere except China. Accordingly, I’d like to focus on the VanEck Steel ETF (SLX) that holds this global exposure.

The fund holds companies like Nucor (NUE) and Ternium (TX) that focus on steel, but also holds metal conglomerates like Rio Tinto (RIO) that do just about all metal production. I am bullish on the entire industrial metals industry given its vast array of discounts, so I am unfazed by the slight “impurity” of the fund.

The fund has been around since 2006 and had incredible performance early on, rising 50% from mid-2006 to its peak two years later. Of course, the industry nearly collapsed thereafter and the fund fell just over 80% in value and has remained at this depressed level since.

Let’s take a look at the ETF’s total returns (which include dividends) vs. AUM over the past decade to see what our fellow investors are up to:

Per usual, we see a pattern of extremely high fund flows during good times and very negative flows during bad times. While SLX has been on a downtrend since 2018, its flows are also at a minimum level which may be a sign that the fund is oversold again.

It is very volatile too. The fund tends to do the opposite of most stocks and “fall-like an escalator and rise like an elevator”. What I mean by that is that the fund rallies with 100%+ performance in a given year and then suffers from long and slow bear markets that last years. This is a signal that there are many short-sellers in the sector that create high short-squeeze potential. Now that the price has fallen and the fundamentals are improving, another squeeze could certainly be on the horizon.

The fund is very cheap. In fact, many of the companies have not been at such a discount ever before. The fund has an incredibly low weighted average “P/E” multiple of 6.8X and a “P/B” ratio of 1.05X. The ETF is very volatile with an annualized standard deviation of nearly 25% and a Beta over 1, but these discounts more than make up for this heightened risk.

Just take a look at the fund’s price vs. dividend yield over the past few years:

As you can see, the fund currently has just about the highest dividend yield ever. Last time the dividend yield was this high, 200%+ return streaks ensued. To see this even better, let’s dive into the fundamental statistics of these companies.

A Bazaar of Fire Sale Stocks

To begin, let’s take a look at the currency and global economic exposure of these companies. Here is a chart of the country weightings of the stocks in the ETF: 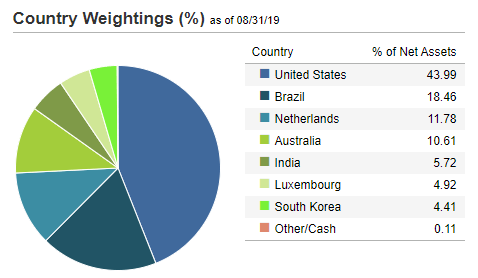 I like this global exposure in general. I have very high long-run growth expectations for Brazil and South America in general, so I expect low currency risk and high demand for the Brazilian producers. The same is true for the U.S. producers, which I imagine will benefit from the need to replace infrastructure.

I do agree with the general consensus that Chinese demand for steel (which has been the driving factor of performance for these companies) will decline for a long period of time. The reality is that the country is a bit overbuilt. That said, China is small compared to the entire Indian Ocean region (India, Vietnam, and parts of Africa) that have extremely high growing industrial demand for steel.

Now, for the companies in particular. Here is a table of the fundamental statistics of the ETF’s holdings: 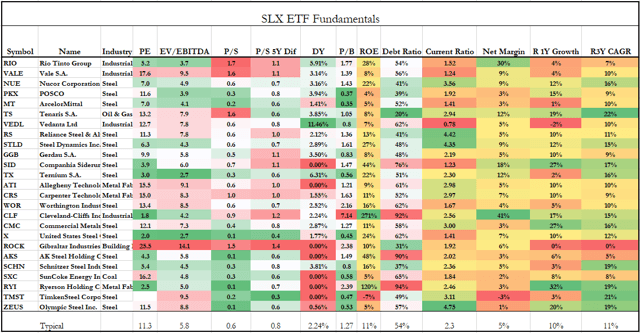 As you can see, these stocks are incredibly cheap. The fund is much more heavily weighted toward the largest companies which also have the lowest “P/E” ratios, so the “typical” level is a bit above the fund’s weighted average.

Most of these stocks are trading at a historical price-to-sales discount of 20% and are very cheap on an “EV/EBITDA” basis. Revenue growth was very strong last year, and it is likely that growth will be slower this year due to the following manufacturing slowdowns. Still, I expect that growth to improve over coming years.

These companies also have strong balance sheets. Most of the larger companies have very low debt levels and strong current ratios, which is a sign that bankruptcy is extremely unlikely for these stocks.

Overall, these companies are a fire-sale. Some of the smaller companies such as Ryerson Holding (RYI) look a bit risky, but the ETF is more heavily weighted toward the best companies.

Take a look at the monthly U.S. steel production and the import price index of steel and iron into the E.U.:

As you can see, production and prices tend to track each other quite closely. Steel production was rising with prices from 2016 to 2018, but has since faltered due to the global economic slowdown.

Frankly, it seems like many investors have been plagued by short terminism. They assume that the current manufacturing slowdown will end like 2008 and are selling steel and other industrial metal producer stocks far too aggressively. Yes, demand and prices for steel will likely be lower this year than last, but that does not mean it will be lower forever as the market is pricing.

Accordingly to McKinsey, the U.S. will need to devote an extra $150 billion per year from now to 2030 to keep its infrastructure abreast. This will likely require a roughly 30-40% increase in steel expenditures. Of course, it requires governments to get their act together and fund these much-needed projects, but the longer they delay, the more steel will be needed.

The average age of U.S. cars is also at an all-time high of about 12 years. It is fair to say that cars produced today last longer than in the past, but like everything, they will need to be replaced and, now that worker wages are rising, I expect this automotive production demand to be another driver for the steel industry.

The U.S. demand for steel will rise and likely cause a strong increase in demand over the coming years. While demand is weakening in China and likely to fall for a long period of time, it will increase in the rest of the world as industrialization continues to blossom in countries that export to China. These include India, Indochina, Indonesia/Malaysia, and East Africa.

These are long-run predictions so they are difficult to put into numbers, but I think it is fair to say that steel demand from these countries in aggregate could be higher than peak demand in China. Indeed, it will be Chinese companies buying the steel on behalf of these countries for the “belt and road” expansionary initiative.

While revenue will be weak in the short-run, I expect it to be incredibly strong in the long-run. Ten years of weak performance is often followed by 10 years of strong performance. Valuations are at a low while investor pessimism is at a peak. If you’re risk tolerant and willing to accept a short-term decline for long-term gain, then SLX may be a good option. For me, SLX is a clear “buy”.

“The Country Club” is a dedicated service that focuses on single-country and regional ETFs with the goal of helping our subscribers diversify globally and get a better grasp on how world events will affect their portfolio. We will certainly be providing subscribers further updates on this idea.

Subscribers receive exclusive ideas, model portfolios, and a wide range of tools including our exclusive “Country Club Dashboard” which allows them to visualize global financial and economic data. If you haven’t already, please consider our 2-week free trial and get your passport to global markets today! 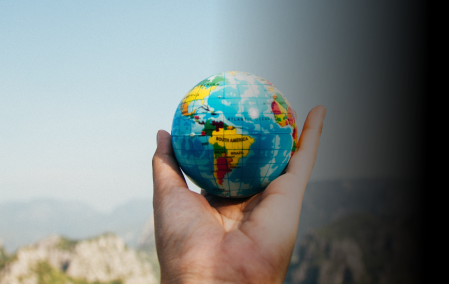 Disclosure: I/we have no positions in any stocks mentioned, but may initiate a long position in SLX, NUE, X over the next 72 hours. I wrote this article myself, and it expresses my own opinions. I am not receiving compensation for it (other than from Seeking Alpha). I have no business relationship with any company whose stock is mentioned in this article.

Nasdaq cracks down on IPOs of small Chinese companies By Reuters

State of the Markets and Rebalancing Your Portfolio

What to Expect for the Markets Next...

Who are Honda’s (HMC) main suppliers?