The Indian economy has been one of the fastest-growing economies in the developing world with annualized GDP growth ranging from 6-11% since 2010. Most of this growth has come from the technology and construction sectors as it has slowly transitioned away from agricultural products. While the country still has high long-run growth potential, I expect economic headwinds in India to continue to make for poor investment returns.

The nation’s high real estate prices look as if they are beginning to pop while manufacturing and confidence is declining rapidly. Prime Minister Modi has buoyed the markets with promises of economic reform, but his ability to stop the accelerating downturn has become increasingly limited as the Reserve Bank continues to lower interest rates with little success.

The iShares India ETF (INDA) is a highly liquid vehicle that tracks the MSCI India Index. The fund has been trading since 2012 and currently has a high AUM of just under $5B in USD so it has more than enough liquidity for long or short positions. Despite high GDP growth in India, the fund has only seen a 34% return since 2011. This gives investors a poor annualized return of only 5.4%.

It is not a high expense ratio that is plaguing the fund, it has a low expense ratio of 0.3%, but holds stocks with high valuations backed by a depreciating currency. According to iShares, the fund’s holdings have a high average “P/E” ratio of just under 20X and an average “P/B” ratio of 2.6X. Those valuations would be fine if economic growth conditions were high, but it appears earnings are on the decline for many holdings. It also has a low dividend yield of 1.6% which is 40 basis points lower than that of the United States fund (IVV) which has a 2% yield.

On a positive note, the ETF does have a beta to the S&P 500 of only 0.35 so it does offer some diversification benefits to investors, but it also has relatively high volatility with an annualized standard deviation of 16%.

The ETF is highly exposed to India’s financial, technology, and energy sector which are more risky than most sectors. Most alarmingly, its largest position (11% of portfolio) is Housing Development Finance Corporation which is directly exposed to high property prices in India and Mumbai in particular. Here is the ETF’s current sector breakdown: 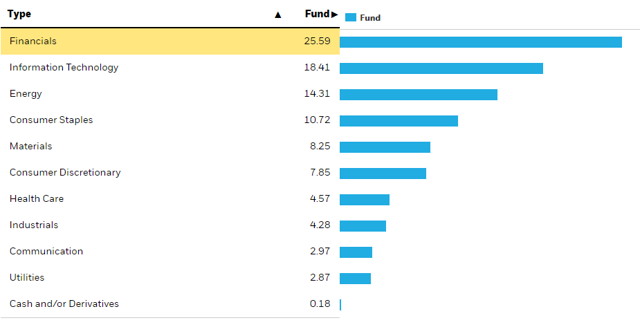 Most of the banks have debt ratios around 90% which is on par with those of the U.S but have “P/E” valuations at 20X or higher which is twice as high as those in the U.S and Europe. I expect prices in financial equities in India to decline such that their valuation matches typical global levels.

Technology stocks are typically regarded as being less exposed to the cyclical economy than banks, but this may not be entirely true in India. Many of its technology stocks saw strong performance over the past few years, but now have valuations around 30X with slowing growth prospects. As global financial liquidity continues to deteriorate, these valuations may fall to more reasonable levels.

Another way to look at exposure is to directly calculate the fund’s beta coefficients to global assets. I like to do this using multiple least squares with the U.S stock market, the U.S dollar, gold, U.S treasury bonds, crude oil, and agricultural products as causal factors. Most performance of any ETF is based on these six global factors.

Here are the results for INDA:

Looking at it this way, we can see that the fund is actually more exposed to the U.S economy than the “35%” beta listed by iShares when its negative U.S dollar beta is taken into account.

The U.S dollar has been rising while the S&P 500 has seen serious downside over the past two weeks. If these two trends continue, it is likely that INDA will take a hit.

Interestingly, we can see that even though the fund is not directly invested in agriculture, it is much more exposed to it than are most countries. Roughly a quarter of India’s GDP still comes from agriculture. For the record, I am slightly bullish on those commodity prices. If food prices finally rise globally then it may be a positive buffer for investors.

Over the long run, it is safe to assume that India will see continued high GDP growth as the government improves its inefficiencies and as its manufacturing and services sector expand. However, it appears that significant economic struggles are on the rise.

Manufacturing has been severely hit due to the ongoing global economic slowdown. This is particularly true for the country’s automotive sector that alone has seen nearly a half million workers lose jobs over the past few months. While INDA does not have a ton of direct exposure to the country’s automotive sector, car sales are known to be a strong leading economic indicator. See car sales below:

Here we can see that sales have struggled to grow over the past decade and are now falling at a rapid pace. Another useful leading indicator is the composite PMI which is essentially an aggregate of many leading indicators: 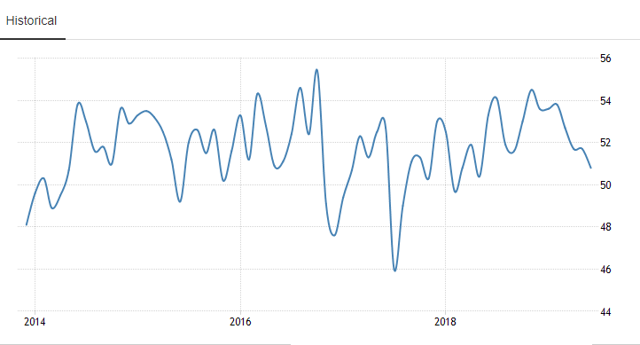 So far, PMI declines are not as blatant as car sales declines, but still look like they will soon cross the 50 level which is usually a recessionary signal (however, this signal did notably fail in 2017).

Property prices in the country’s largest cities are also disconcertingly high. At the extreme end, we have Mumbai with an average price to income ratio of 43X which puts the city at similar valuations to those in China. Next is Delhi at 13.6X, then Bangalore and Hyderabad at just under 9X. Outside of the United States and other countries, these are just above typical. But remember, they are also as high as PI ratios in the U.S at the peak of the bubble. So, it is safe to say there may be a bit downside in Indian real estate.

Home price growth looks as if it is just about to become negative again: 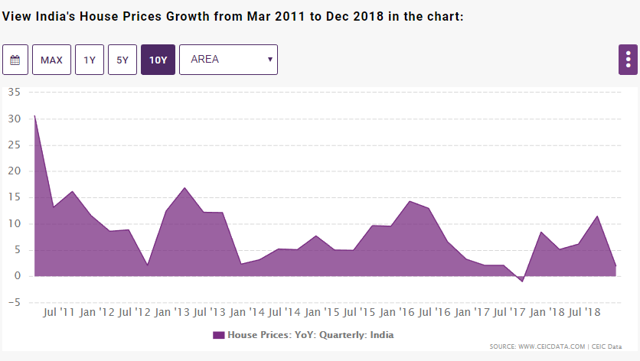 As you may have surmised by all of the above macroeconomic data, India flirted with a recession in 2017 as did most of the world. In my opinion, the difference between then and now is that world governments and central banks have already played their hand. The global economy went on life support during the 2015-2016 slowdown and, in my opinion, there is little any government can do (including India’s) to stop it this time around.

Overall, the macroeconomic environment in India looks weak and adds to the negative factors concerning the INDA ETF.

I have found that single-country ETFs are good short targets when they have adequate liquidity, a low dividend carry, a weak equity market, and a weakening currency. This is the case for the INDA ETF. The Rupee as well as the equity market saw a rapid 10% rally due to Prime Minister Modi’s recent 2nd term victory but has fallen 15% since then. See chart of INRUSD vs. INDA below:

If the recession I expect occurs, we could certainly see 50% in downside over coming months. That may sound extreme but with 20X valuations combined with weak or falling earnings it is feasible. Further, the government will likely lower interest and try to indirectly devalue the Rupee to boost exports. While that may help the GDP, it will cause INDA to fall because it is not currency-hedged.

Of course, there are many risks with trying to short sell INDA. I like it because it looks like a convincing way to hedge the global economy and take advantage of a cyclical downturn, but if the economy rebounds as in 2017 then we could see a large rally. I think the government has run out of room to lower interest rates much further without spiking inflation, but governments can be crafty in finding ways to provide economic stimulus.

Overall, it will be interesting to see how Indian equities grapple with a potential downturn.

We will soon be launching our first marketplace service “The Country Club.” This will be a dedicated service that focuses on single-country and regional ETFs with the goal of helping our subscribers diversify globally and a better grasp on how world events will affect their portfolio. We keep a close eye on India and other emerging markets and will be providing subscribers further updates on this idea. Please give us a “Follow” if you would like to be notified upon our launch!

Disclosure: I/we have no positions in any stocks mentioned, but may initiate a short position in INDA over the next 72 hours. I wrote this article myself, and it expresses my own opinions. I am not receiving compensation for it (other than from Seeking Alpha). I have no business relationship with any company whose stock is mentioned in this article.

Hong Kong Protesters Descend on Airport, With Plans to Stay for Days

Time To Step Aside From Utilities? –...