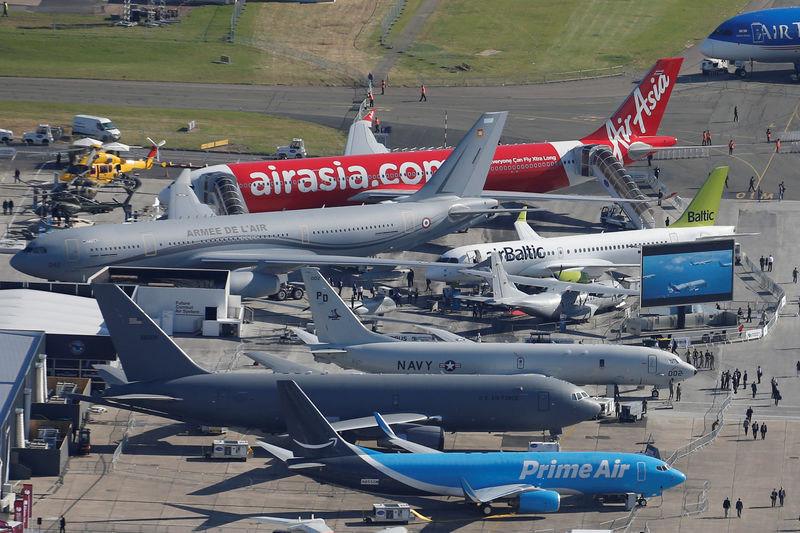 LE BOURGET, France (Reuters) – Airbus and Boeing (NYSE:) bagged more than $17 billion in plane deals on day two of the Paris Airshow as their sales teams scrapped for orders after a downturn in business at many airlines and the grounding of Boeing’s top-selling jet.

Airbus extended its early lead in orders at the event with a $6 billion deal on Tuesday to sell 36 planes to Philippines airline Cebu Air, including 10 of the new long-range A321XLR model launched on Monday.

The European firm also struck a deal to sell a further 30 A320neo aircraft to Saudi Arabian Airlines, worth $3.3 billion at list prices, while Malaysia’s AirAsia converted 253 A320neo orders to the larger A321neo model. Financial terms of the AirAsia deal were not disclosed.

Boeing, meanwhile, gained a much needed lift after a slow start to the show on Monday as Korean Air committed to buying 20 of the U.S. company’s 787 Dreamliners, worth $6.3 billion at list prices. Air Lease Corp also committed to buying five 787s, worth about $1.5 billion.

Airbus shares were up 0.6% at 1225 GMT, having touched a record high of 126.50 euros in early trade. Boeing shares climbed more than 1% in pre-market dealings.

Despite the flurry of activity, the aerospace industry’s biggest annual event has been quieter than normal, fuelling speculation that a decade-long boom might be coming to an end.

With airlines struggling to contend with overcapacity, slowing economies and geopolitical tensions, some analysts warn Airbus and Boeing could face a growing number of cancellations from their bulging order books.

Boeing in particular is suffering after the grounding of its MAX 737 aircraft in March following two deadly crashes.

The U.S. company was dealt a fresh setback on Monday when its engine supplier revealed a delay affecting its all-new 777X jet. Boeing sales chief Ihssane Mounir said on Tuesday that considering a freighter version of the 777X would be a “natural progression” for the project, but gave no timeline.

“Although investors have started to ask questions about the state of the upcycle, the aerospace industry remains very confident in the current state of the market,” analysts at Vertical Research Partners said in a note.

Sources familiar with the matter say that American Airlines and leasing giant GECAS are also in talks to buy Airbus’s new A321XLR, which is aimed at helping airlines deliver new routes with smaller planes and stealing a march on Boeing’s own plans for a potential new mid-market jet.

As well as 10 Airbus A321XLR jets, Cebu Air said it was buying 16 larger A330neo planes and five of the A320neo model. Finance chief Andrew Huang told a news conference the A330neo jets would have up to 460 seats, allowing the budget airline to add new international routes.

Cebu, which operates the Cebu Pacific brand, had a 51% share of the Philippine domestic market in 2018, according to company data. In the international market, its 19% share was second only to the 28% held by full-service rival Philippine Airlines.

Saudi Arabian Airlines, which already has 35 planes on order from the Airbus A320neo family, said its additional purchases included 15 of the A321XLR jet and that it also has an option to buy as many as 35 more A320neo aircraft.

Korean Air said in October 2018 it was likely to order more Boeing 787 jets, mainly to replace its existing aircraft, as it looks to streamline its fleet and reduce costs.

Make a Dash For Cash With Cash Flow ETF

SoftBank seeks help from its COO to...