It’s been an uneventful start to the year for silver (SLV), under-performing the majority of asset classes, despite Middle East tensions that many thought might ignite a fire under the metal. While gold (GLD) has already broken out of its multi-year base, silver continues to build out its base but will need to tack on another 20% return before things get interesting. For those patiently waiting on this breakout, it’s worth looking at the 2004 breakout to see what would constitute a reliable breakout, and suggest that the bull market has finally begun.

As we can see in the chart below of silver, the metal continues to trade in a multi-year range, with box dimensions of $14.00 to $22.50. The bulls are going to want to see a monthly close above $22.50 to suggest we’ve finally got a real breakout, but the structure of this base is encouraging as we can see the metal rounding out after a multi-year bear market.  We’ve also got marginally higher lows in place and some commitment to this rally, which suggests that the next 15% move is likely higher. 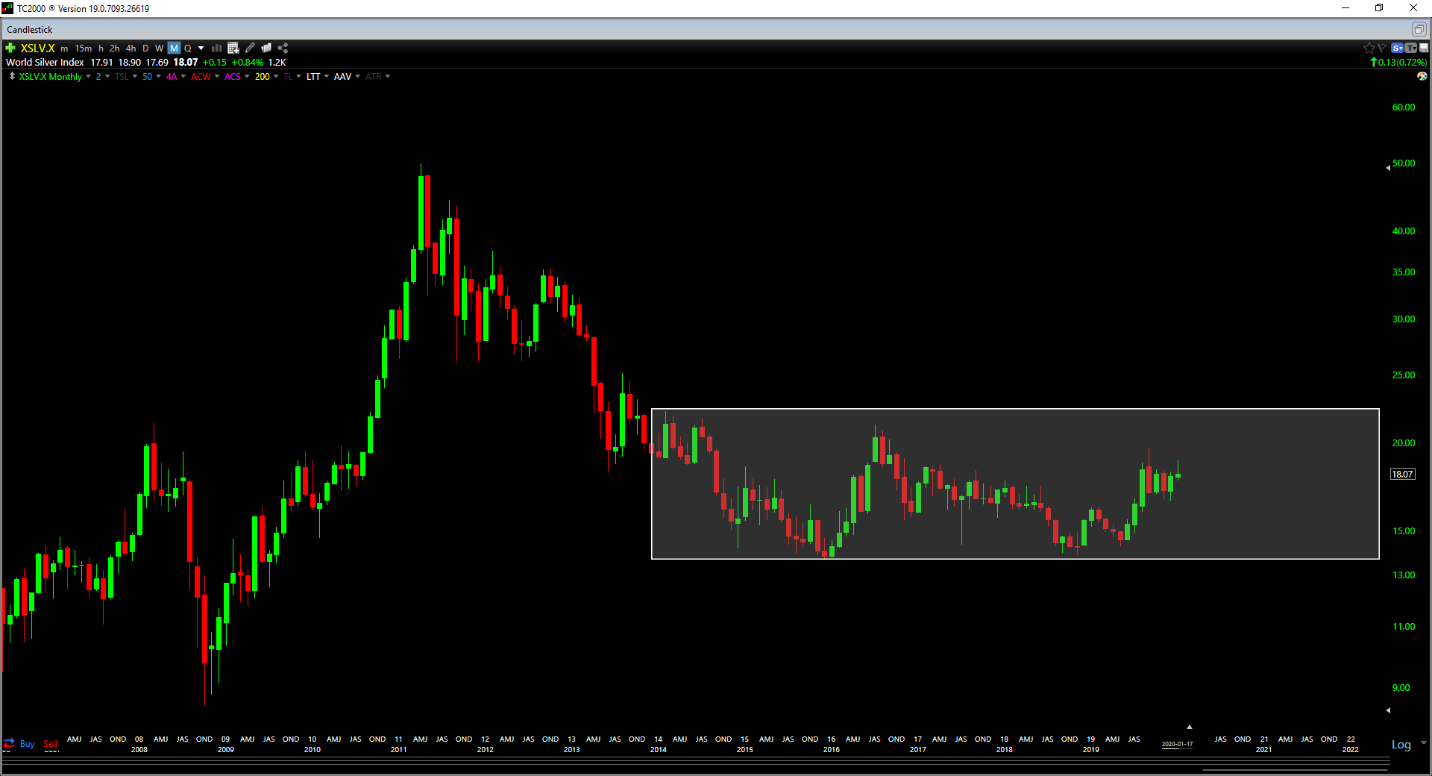 The only setback, however, is that silver tends to lag gold on its breakouts, and silver lagged gold by roughly 15 months on its first false breakout, and 23 months before we saw follow-through to its multi-year breakout earlier in the 21st century. Based on this timeline, the earliest silver would attempt to break out of this range would be October of 2020 based on gold’s June breakout. However, before we see a real breakout that shows follow-through, this could take another year or longer, with this likely taking place in April 2021 or later. Therefore, for silver bulls hoping to see a new silver price of $23.00/oz or higher to finish 2020, the odds suggest this is unlikely. While we could hit $23.00/oz before year-end, there’s a high likelihood this breakout will get sold into initially. 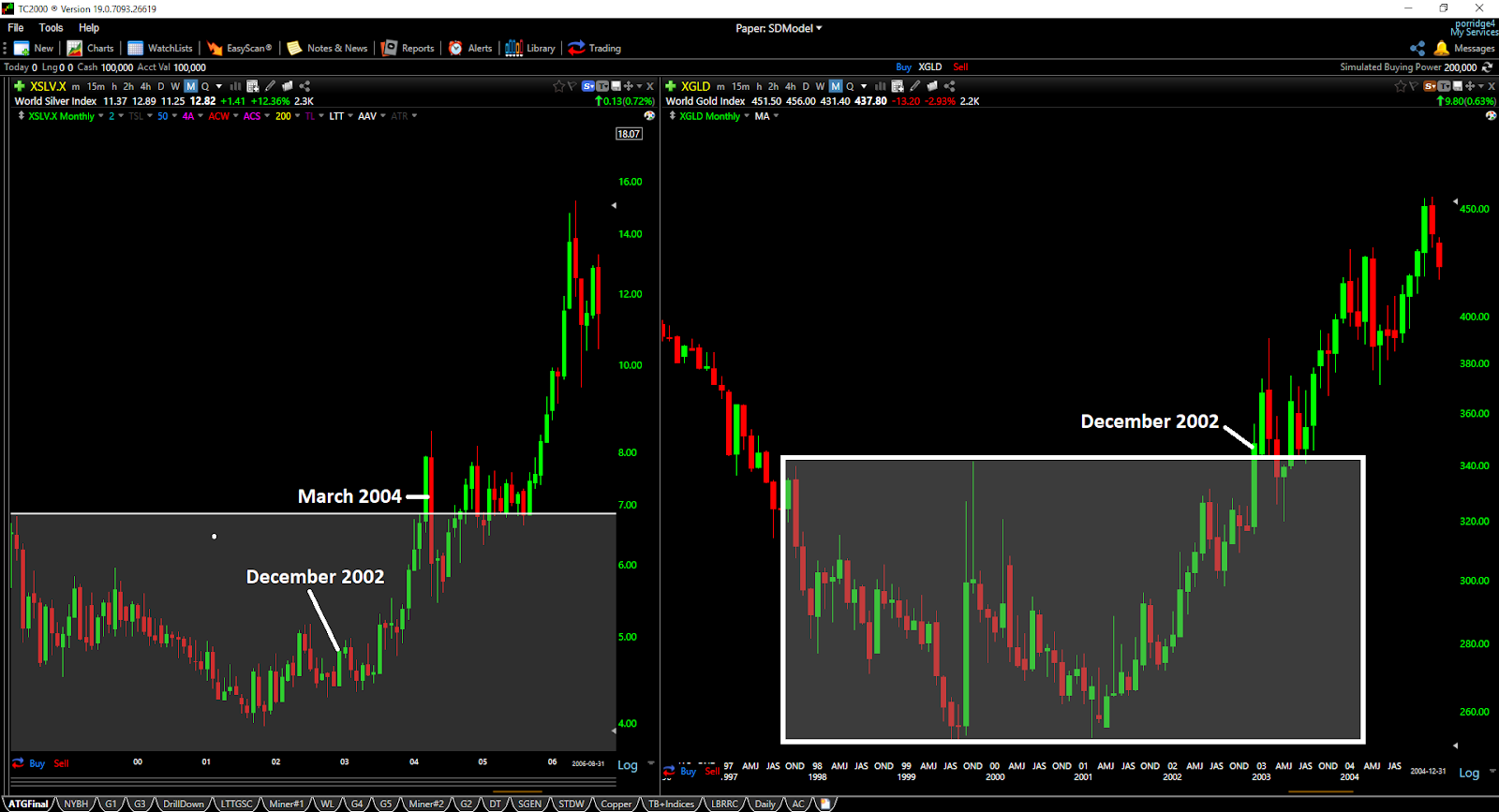 However, what should be comforting, is that gold is holding its breakout, and this suggests that a silver breakout is inevitable, even if it the bulls may have to wait for another 9 to 12 months. As we can see from the look of silver consolidating in the upper portion of its range in 2002 through 2003, we have a similar look currently in 2020 with silver beginning to make higher lows in the upper part of this base. The other good news is that the long-term trend indicator, the ADX, is continuing to make higher lows and is heading closer to a reading of 30, which would confirm a new uptrend. As the chart below shows, the bull market for silver began when the ADX pushed above 30 and held there, coinciding with the breakout in the silver price. 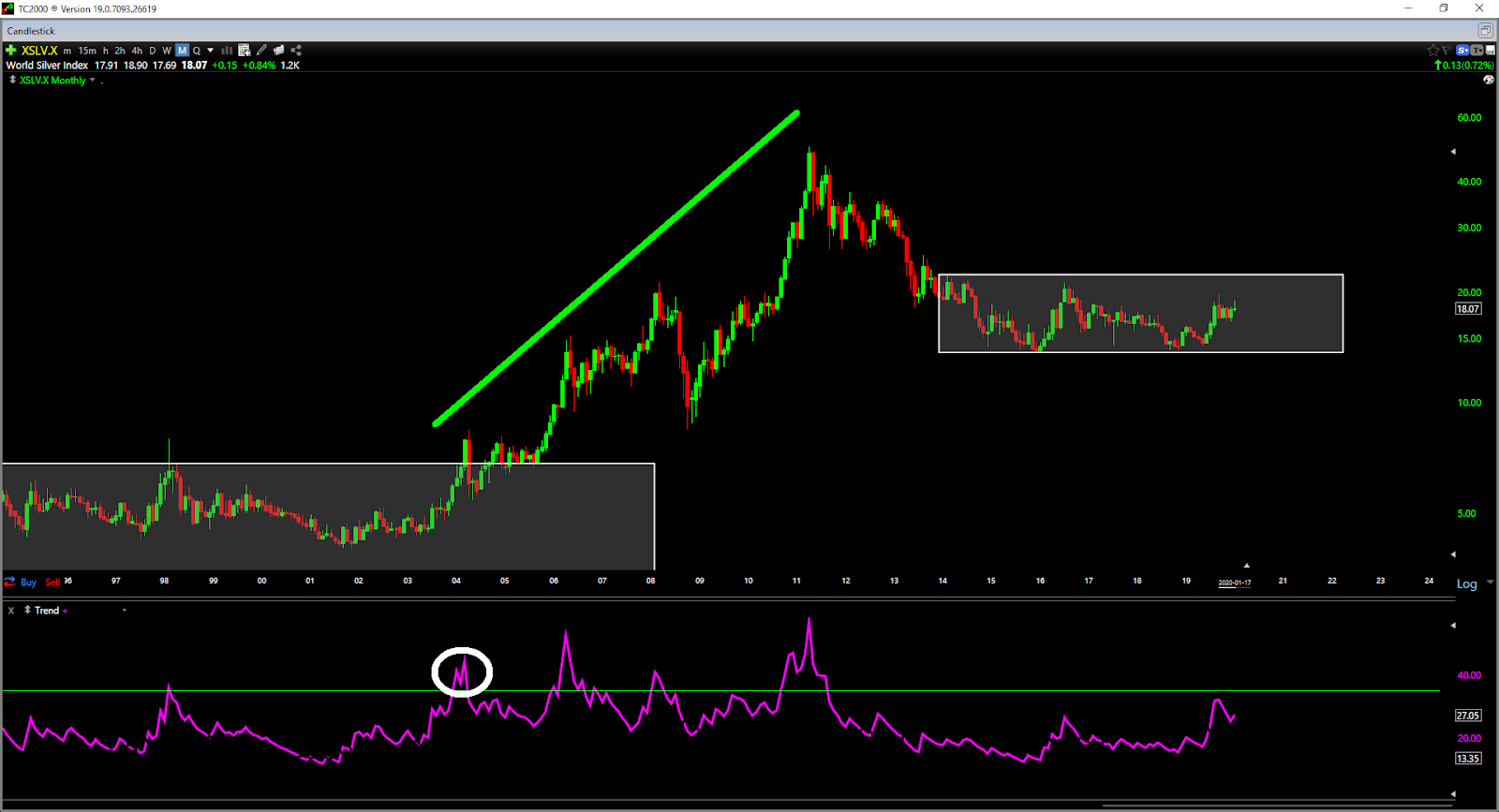 In summary, while the lagging performance of silver may be discouraging, a breakout for silver is very likely within the next 12 months as long as gold can continue to hold its breakout level at $1,380/oz. Based on the amount of commitment the metal has shown to this breakout level thus far, I would argue that this is a very high probability. This is excellent news for those looking to buy silver stocks, as it means that they have another few months to accumulate silver names while they’re relatively cheap, in comparison to many gold stocks which are closer to fairly valued and have already played a lot of catch up. The key to confirming this breakout will be an ADX reading above 30, and a monthly close for silver above $22.50/oz.

So how does one play this?

I continue to see any 10% corrections towards the $16.25/oz – $16.70/oz level in silver as opportunities to accumulate silver and silver miners, with my favorite silver miner being Silvercrest Metals (SILV). The company has the highest-grade undeveloped silver project in North America and has a team that’s done it before with Silvercrest 1.0 acquired in 2015. As long as the bulls continue to defend $16.25/oz on silver, any corrections should be treated as noise. In addition, I would consider any pullbacks in Silvercrest Metals that hold above $6.00 as noise, and merely a prelude to new highs later this year.

SLV currently has an ETF Daily News SMART Grade of C (Neutral), and is ranked #9 of 33 ETFs in the Precious Metals ETFs category.

About the Author: Taylor Dart

Taylor Dart has over 10 years of experience in active & passive investing specializing in mid-cap growth stocks, as well as the precious metals sector. He has been writing on Seeking Alpha for four years, and managing his own portfolios since 2008. His main focus is on growth stocks outperforming the market and their peers. In addition to looking at the fundamentals, he uses different timing models for industry groups, and scans upwards of 2000 stocks daily to identify the best fundamental opportunities with the timeliest technical setups. Taylor is a huge proponent of Trend Following and the “Turtles” who enjoyed compound annual growth rates of over 50 percent per year.