Crude Oil: Iran Says They Are Willing To Talk

On September 14, the attack on Saudi oilfields that temporarily knocked out 50% of output amounting to 6% of world’s supplies caused a price spike in both WTI and Brent crude oil futures. However, the growth in US production likely tempered the price action on the upside. Technological advances and regulatory reforms have made the US energy independent and a net exporter of crude oil and natural gas. In past years, the attack might have caused the price of oil to double or more, but the price came back down over the past week. NYMEX November crude oil futures were trading at the $56.50 per barrel level at the end of last week after hitting a high at almost $64 on September 16.

The attack on Saudi Arabia had Iran’s fingerprints all over it, and the rising tensions in the Middle East are likely to keep a bid under the price of the energy commodity.

Meanwhile, Iran has been suffering under the weight of US sanctions. Last week, the President of the Islamic Republic appeared to indicate that the nation may be willing to discuss a new nuclear nonproliferation agreement if the US lifts sanctions. The prospects for any talks that could lead to an end to attacks sent the price of oil lower. The United States Oil Fund (USO) tracks the price of NYMEX crude oil futures on a short-term basis.

Crude oil falls as Iran talks to talk of peace

Last week, the attack on Saudi oil production faded further into the market’s rearview mirror as the price of the energy commodity continued to decline. 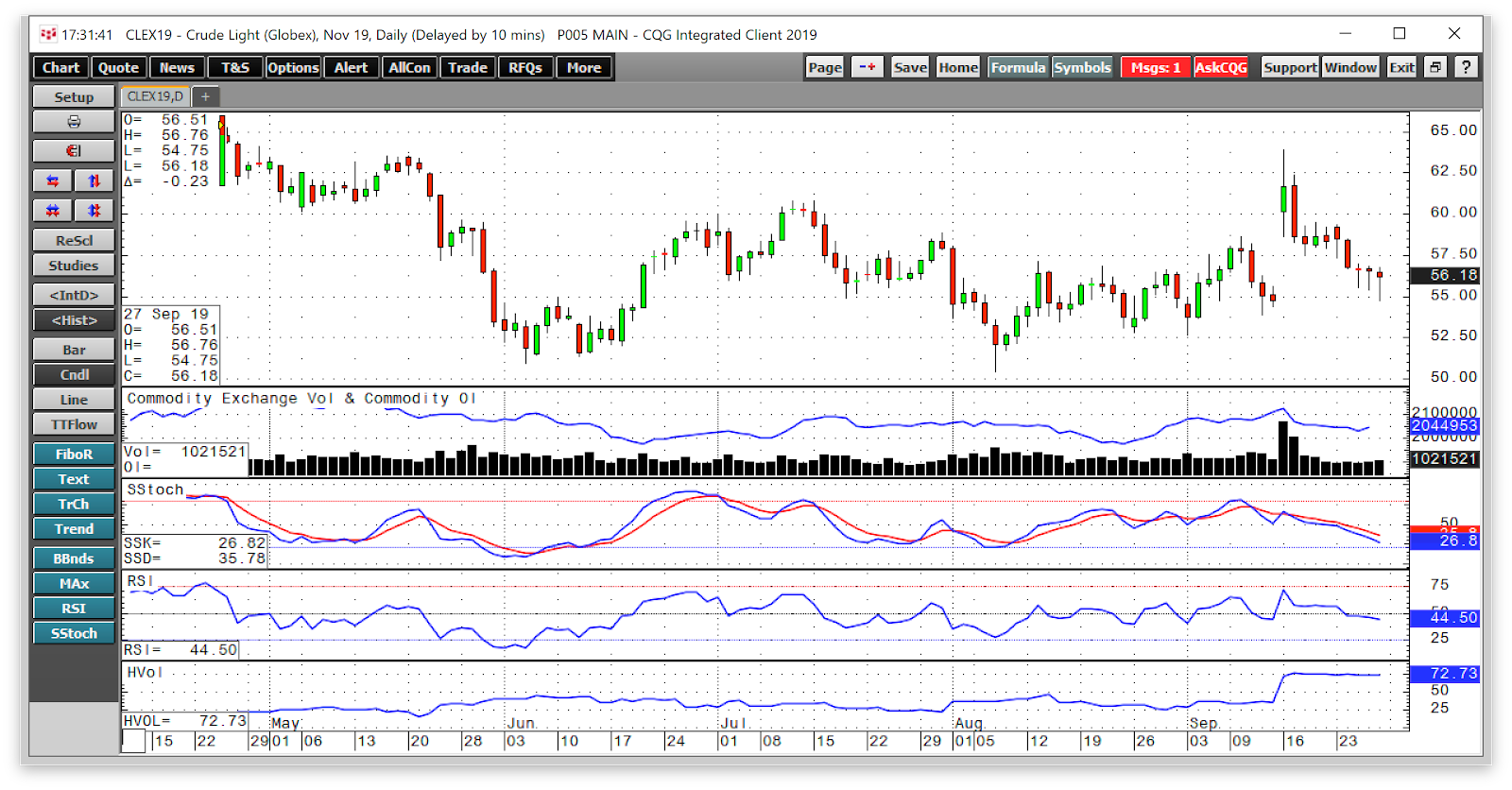 As the daily chart of November futures highlights, the price of oil fell to a low at $54.75 on September 27, which was four cents below the closing price on September 13, the day before the attack. Crude oil has given back all of the gains since September 16 and settled the week a bit higher at $55.91 per barrel. Last week, the American Petroleum Institute and Energy Information Administration reported that inventories rose, which weighed on the price of the energy commodity. However, Iran’s President Rouhani continued to deny involvement in the attacks but seemed willing to enter into discussions over changes to the nuclear nonproliferation agreement if the US lifts sanctions. The Iranian President even went as far as sitting for an interview with Chris Wallace of FOX news.

The lack of any retaliation from the Saudis or US in the wake of the attacks and statements by the President of Iran appears to have calmed the oil market, for now.

Words and actions are a different story

Even after the 2015 agreement between Iran and the US, Britain, China, France, Germany, and Russia, chants of “Death to America” and “Death to Israel” continued to ring out in Iran and even in the Iranian Parliament. The proxy war with Saudi Arabia only intensified over the recent years and was raging on multiple fronts before the US walked away from the deal in 2018.

The Iranians appear to be more flexible to talks as the US sanctions are devastating their economy. However, the past actions of the government suggest that they may talk the talk of peace; they will not follow through. After the 2015 deal, Iran continued to look to expand their influence in the Middle East with support for the Assad regime in Syria, Yemeni rebels, and other groups the US designates as terrorist organizations.

The hatred between the US and Iran dates back to the late 1970s and the Islamic Revolution and lifting sanctions would not likely usher in a new era of cooperation. At the same time, in the most recent interview, the Iranian President said that Israel funds and supports ISIS, the US supports terrorism and that his nation was not responsible for the attack on Saudi Arabia. However, the price of crude oil dropped because of the calm in the region in the wake of the September 14 attack.

Crude oil is now back to where it started, but three factors support higher prices than the level at the close of business last week. The most bullish factor remains Iran. The potential for other provocative actions in the Middle East exits as the Iranian economy suffers under the weight of US sanctions. Months ago, President Rouhani had said that if Iran cannot ship its oil to customers around the world, they would make sure other producing nations in the region suffer the same fate.

The technical picture for crude oil is also supportive of a recovery. The recent decline from the September 16 peak drove price momentum into oversold territory. At the same time, the total number of open long and short positions in the NYMEX futures market decline from 2.125 million contracts on September 16 to 2.045 million at the end of last week. Falling open interest and declining price is not a technical validation of an emerging bearish trend in a futures market.

Finally, the potential for some degree of de-escalation in the trade war between the US and China would lift the Chinese economy and its demand for crude oil. As we move into Q4 this week, memories of last year’s move that took the price of crude oil from $76.90 in early October to a low at $42.36 in late December could cause bearish sentiment to increase. However, the situation surrounding Iran is likely to underpin the market and limit the downside prospects for the price of the energy commodity over the coming weeks and months.

USO currently has an ETF Daily News SMART Grade of A (Strong Buy), and is ranked #1 of 109 ETFs in the Commodity ETFs category.

About the Author: Andrew Hecht

Andrew Hecht is a sought-after commodity and futures trader, an options expert and analyst. He is a top ranked author on Seeking Alpha in various categories. Andy spent nearly 35 years on Wall Street, including two decades on the trading desk of Phillip Brothers, which became Salomon Brothers and ultimately part of Citigroup. Over the past decades, he has researched, structured and executed some of the largest trades ever made, involving massive quantities of precious metals and bulk commodities. Aside from contributing to a variety of sites, Andy is the Editor-in-Chief at Option Hotline.

What Aphria’s Earnings Report Could Mean for...