Vietnam: A Frontier Market on the Cusp?

Could Vietnam be the next exciting growth story to unfold in the frontier market space? Recently, Vietnam has attracted global investor interest as a potential beneficiary of the ongoing trade war between the U.S. and China, but investors have also taken notice of the country’s attractive long-term fundamental characteristics. As the government seeks to boost foreign investment by relaxing foreign ownership limits on local companies, Vietnam’s status as a frontier market may change in the future. Additionally, Vietnam is leveraging its international trade relationships to maximize the benefits of an export-driven local economy, against the backdrop of a changing global economic landscape.

Making the Case for Investing in Vietnam

We believe the investment case for Vietnam is supported by several long-term dynamics. First, Vietnam’s growth rate has increased since the 2008 global financial crisis. For the last 10 years, Vietnam’s annual GDP growth rate has exceeded 6%, compared to an average of 5% for emerging market countries. In 2018, Vietnam’s GDP growth is estimated to have exceeded China’s by around 50 basis points (7.08% in Vietnam vs. 6.57% in China).1 Vietnam’s economic growth may be linked to the country’s abundant natural resources and a strong manufacturing base, which has led to a robust export-based economy that is also supported by healthy domestic demand. 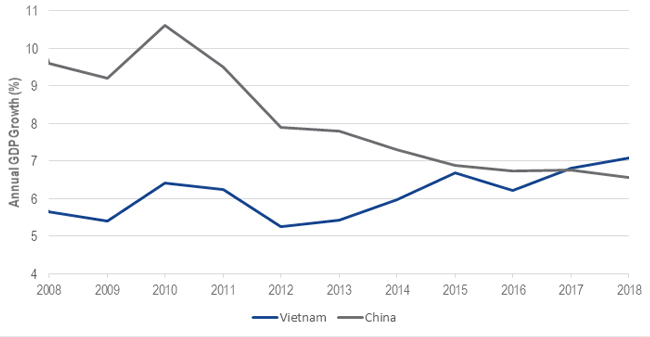 In 2008, inflationary pressures led to a significant decrease in foreign direct investment. Since then, the government has been relatively successful in managing inflation despite a fast-growing economy and heavy foreign investment. In 2018, Vietnam’s annual inflation rate was estimated to be 3.5%, compared to an average 4.8% for emerging market countries.2

Behind An ETF Subadvisor | ETF.com

Airlines Could Be A Good Bet According...