Vanguard FTSE Emerging Markets ETF (VWO) seeks to track the return of the FTSE Emerging Markets All Cap China A Inclusion Index. It invests in companies in various emerging markets including China, Brazil, and South Africa. As of September 16, 2019, its return for the past year is 3.5%, slightly underperforming the S&P 500 Index’s 3.7% yearly return.

VWO faces huge amounts of uncertainties in its short-term performance, but it is a good choice for investors who are interested in benefiting from China opening-up its capital market and the economic growth of emerging markets, in general, in the long term.

VWO invests by sampling the FTSE Emerging Markets All Cap China A Inclusion Index and approximating its security collection. The following table shows the regional breakdown of the Index as of Aug. 30, 2019. The top regions are China (34.62%), the Taiwan island (14.06%), and India (10.77%) which collectively take up nearly 60% of the total portfolio. 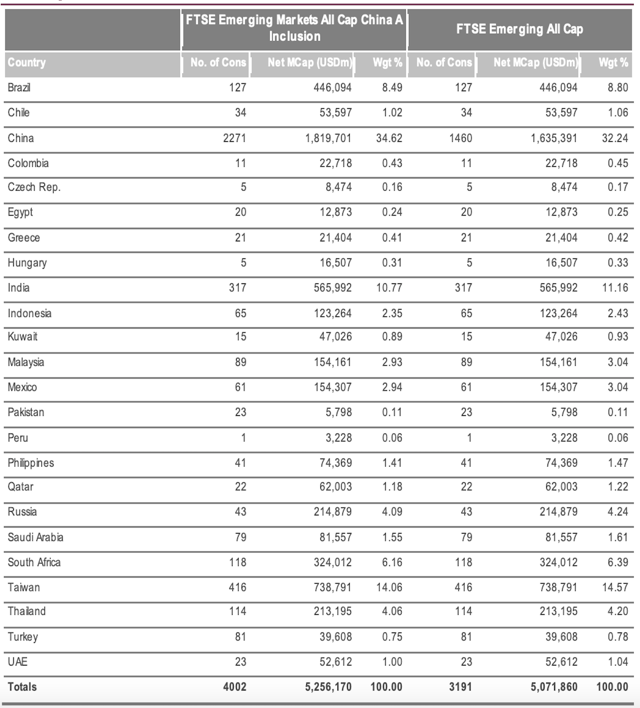 The table below shows the top ten company holdings of VWO. Chinese companies constitute a large share of its portfolio, not just China-concept stocks listed in the US but also mainland companies listed on the Hong Kong Stock Exchange.

According to FTSE, the A-share (stocks in Shanghai and Shenzhen stock exchanges) weighting in its FTSE Emerging Markets All Cap China A Inclusion Index is expected to grow as the total R/QFII allocations increase. In order to restore foreign investors’ confidence and attract more capital inflows, China’s State Administration of Foreign Exchange recently announced that quotas would be removed on the dollar-dominated qualified foreign institutional investor (QFII) scheme and its yuan-denominated sibling, RQFII. QFII and RQFII allow global institutional investors to invest in RMB-denominated A-shares.

Before the deregulation, a growing number of global index publishers, such as MSCI, FTSE Russell, and S&P Dow Jones Indices, have been adding China stocks and bonds into their benchmarks. This announcement further encourages capital inflows into the Chinese market and provides a strong boost to A-shares’ valuation. This provides further access for investors with an appetite for profiting from the expanding capital market in mainland China. In the long run, if China proves that it can effectively mitigate the impact of the trade war and maintain its growth, Chinese companies in VWO’s portfolio deserve a significantly higher valuation.

Short-term uncertainties persist in the market and in world politics. In October, representatives from China and the U.S. will meet again in Washington DC for trade negotiations, but with the 2020 US elections coming up, it is questionable if both sides want to get a deal done now or they prefer to see what happens after the election. If the disputes between China and the US get further escalated, the global stock market will take a hit and VWO which has 48.68% of its portfolio located in Greater China will be particularly affected. With Trump changing his tone every now and then, it is really hard to predict if the situation will get worse or better in the short term.

Besides, as FTSE has stated in its prospectus, VWO has a high potential for growth and also high risks. Investing in emerging markets inevitably means that share value may be more volatile than that of stock funds focused on developed countries due to economic volatility, market inefficiency, and lack of transparency. For example, Brazil and South Africa, which take up 8.49% and 6.16% of VWO’s total portfolio respectively, have been seeing large swings in their GDP growth. The slowdown in global demand will only worsen these countries’ short-term economic outlook. 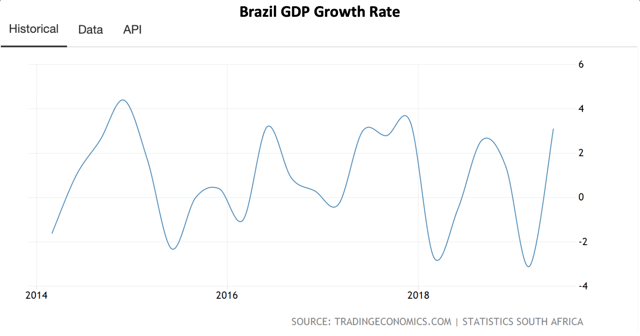 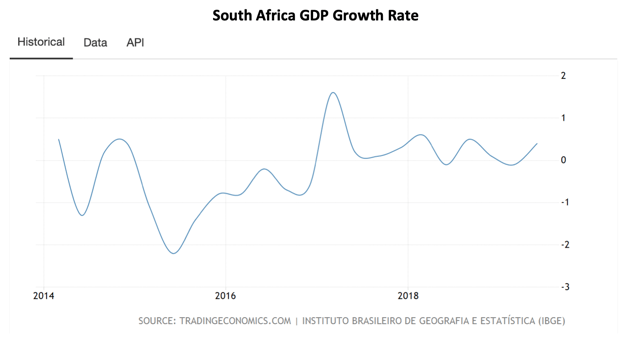 As of Aug 31, 2019, the weighted average P/E ratio of VWO is 13.12. There is no strong thesis supporting that VWO will bring investors’ short-term profits. But for those who want to benefit from China’s capital market opening up and long-term economic growth of emerging markets, VWO is a good choice due to the following reasons. First, its geographical diversification provides a nicer balance and helps mitigate some losses if China’s economy falls below expectations. Second, different from leveraged ETFs like the Direxion Daily FTSE China Bull 3X Shares (YINN), it is long-term focused and does not use leverage, which makes it a safer investment instead of a value destroyer. Despite that, investors should keep in mind that volatilities are currently piling up in emerging markets, so it might be a good idea to wait until the big picture becomes clearer.

A Rerun From the 1970s? This Economic Episode Has Different Risks