For holders of the United States 3x Oil Fund (USOU), it was a hard day with shares falling by over 10% on the back of the market’s reaction to the yield inversion in Treasuries. While this was a fairly strong decline, this type of volatility can regularly be seen in the leveraged ETF since it multiplies the return of a commodity which is already fairly volatile by a factor of three. It is my belief however that the price of crude oil is likely to rise and USOU is a strong ETF to capture the move.

Let’s start with a discussion of the nuances of the USOU ETF. If you’ve followed the energy commodity ETF and ETN space, you’re likely aware that there are a variety of methodologies utilized. It is important to pay careful attention to the method used and understand it completely to prevent potential losses since different methodologies can lead to radically different results between instruments.

In the case of USOU, it is fairly simple – it is just 3 times the daily return of USO. USCF Investments provides a handful of commodity ETFs and USO is by far the most popular. USO is a simple ETF which gives exposure to the front-month contract in crude oil and during a certain window before expiry it rolls the exposure to the next month as seen in the following schedule.

At present, the roll window has passed, so this means that USO is no longer holding the front month (which is September) but is rather holding October crude (as seen in its holdings).

When you hold USOU, you are holding something which leverages up the position and multiplies this effect by a magnitude of three. This effect is called “roll yield” and understanding roll is critical for understanding the long-term return of ETFs and ETNs which give exposure to futures markets.

Put simply, roll yield is the gain or loss associated with holding a position in a later month than the prompt in a futures curve. As seen in the following chart from Wikipedia, there is a tendency for the price of a futures contract to approach the value of the front month or spot market as time progresses. 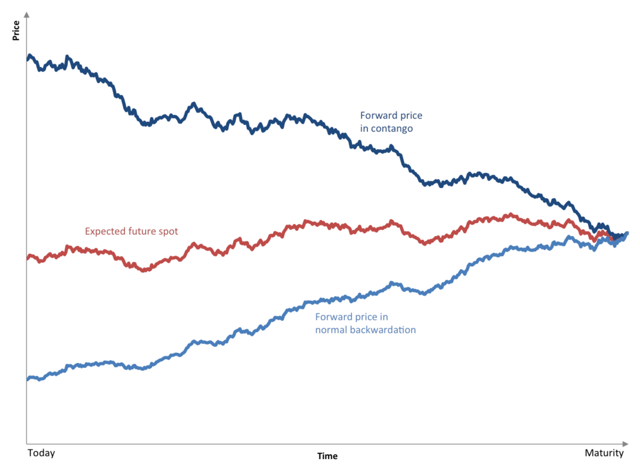 The reason why USO has lagged the return of the underlying price of WTI over the last decade is that the futures curve has largely been in backwardation in most months during this period. Specifically, the market has been in contango in the front two contracts in 78% of all months over the last 10 years. This means that roll yield for USO (remember that USOU is just 3x the return of USO) has been negative in most months.

At present, USOU is holding October futures which means that roll yield is in full effect until prompt expiry and October shifts to be prompt. As you can see in the current forward curve, structure is roughly flat in the front contract but heavily backward throughout the rest of the curve. 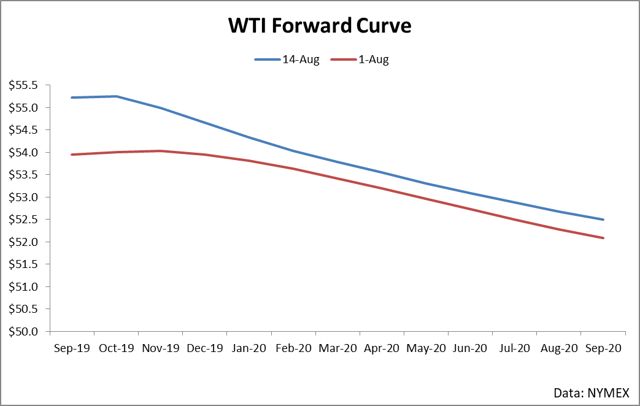 What this means is that right now roll yield on USOU is basically flat but this week has seen substantial backwardation (with some days getting as high as $0.14 per barrel). It is my belief that roll yield will push even further into positive territory in the near future based on the ongoing fundamental bullishness seen in the underlying crude balance of North America.

This year, the key balancing factor for North American crude oil has been OPEC. At the end of last year and on the back of a strong decline in the price of crude oil, OPEC agreed to reinitiate production cuts. This agreement was immediately followed by the end of the downtrend in crude oil and a rally in price for the next 5 months of over $10 per barrel. However, around the beginning of May, crude prices fell in conjunction with macroeconomic concerns as well as in tandem with a resurgence of U.S. inventories. Following these price declines, OPEC agreed to extend the cuts through March of 2020.

The effects of these cuts can be clearly seen when examining the year-to-date balance in crude oil. 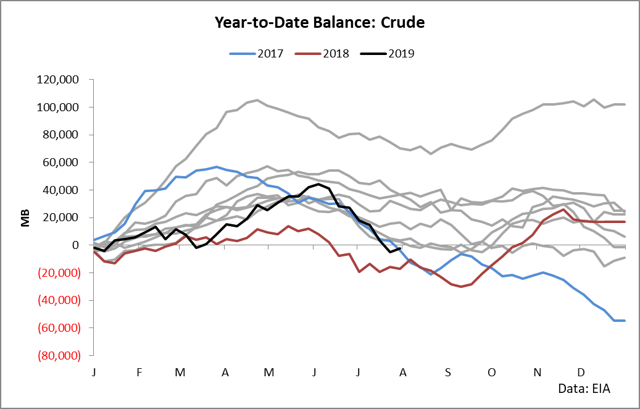 As you can see in the chart above, the year-to-date balance has been weak almost this entire year with some of the largest draws (and weakest builds) seen in the data. The reason why this weakness in inventories has occurred can be clearly seen when you take a look at imports – both the year-to-date level as well as where the barrels are coming from. 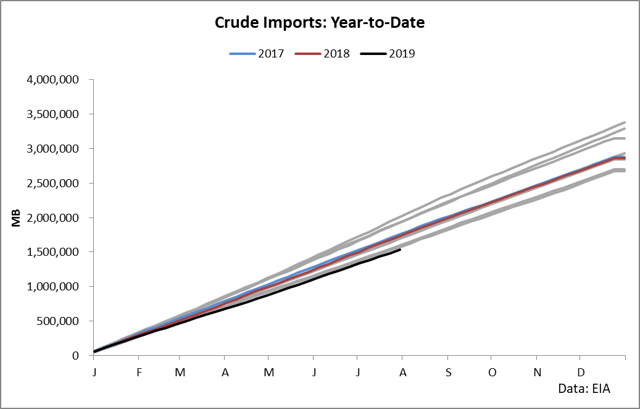 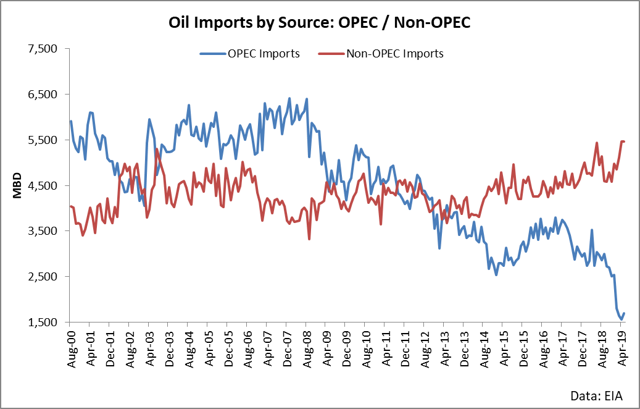 Simply put, OPEC is draining North American crude stocks with the explicit goal of getting higher prices in crude oil. OPEC is powerful and OPEC typically wins. The markets currently are shifting and the United States is the largest crude producer in the world – but OPEC’s ability to control and constrain supply based on their cartel-like decisions means that the flexibility to control prices largely rests in their hands.

Saudi Arabia has recently signaled that it will do whatever it takes to get the price of crude higher and Saudi Arabia is basically the key decision-maker of OPEC. There’s a good chance that the real reason they want higher oil prices is for Aramco’s IPO, but for traders exposed to the outright price of the commodity, the theme is clear: don’t fight OPEC and buy crude.

USOU represents an excellent opportunity to trade crude to the upside in that it provides a leveraged exposure to a roll which is switching to be backwardated. As stocks draw, structure tends to rise which means that as OPEC continues pushing in for tighter inventories, structure is likely to steepen and the roll is likely to become more positive. Also, as prices rise, USOU will give leveraged exposure to this movement which is likely to be beneficial (provided adequate risk management is in place) in the near future. It’s time to buy USOU.

While Many Look for an Exit, Island Cannabis CEO Plans to Keep Company Private