Buying a put contract on Invesco CurrencyShares British Pound Sterling Trust ETF (FXB) will mitigate the uncertainty and risk of the declining value of Sterling. FXB is an EFT that delivers exposure to the value of Sterling relative to the U.S. dollar. Many questions remain unanswered surrounding Brexit.

Will there be a new vote? A new deadline or perhaps an agreement? Slowing growth in the international market has led to lower exports and a weakening economy in the UK. This, along with the ongoing political tension between the UK and the EU has unsettled investors and citizens alike as the likelihood of Brexit increases without agreed upon terms between the UK and the EU. Many companies are making plans or already have left the UK due to additional requirements which will become effective if Britain leaves the EU. Ultimately, the value of the British Pound Sterling will be negatively impacted. Therefore, we recommend buying a put contract on the FXB ETF.

British Prime Minister, Theresa May is facing a political impasse at home and in the European Union in negotiating the terms of the UK’s separation from the EU. The Northern Ireland border continues to be an issue. The EU’s position is to keep an open border in Ireland, an insurance policy known as the backstop while British Parliament has disputed this position, potentially resulting in “no-deal” exit. The deadline for the no-deal exit is March 29th, but that could be pushed back by agreement between the UK and EU. A no-deal would disastrous for the Pound in the short run, whether that occurs in accordance with the original deadline or takes place later. We predict that, even with a deal, the British Pound Sterling will be negatively impacted. Based on uncertainty, slow economic growth and declining exports we recommend taking a short position in the FXB ETF as we are expecting it to depreciate.

In addition, the British economy grew at .2% in the Q4 2018 which is lowest the UK has experienced since 2012. Meanwhile, the risk premiums for Euro Stoxx have declined by 1.2 %. Even if a deal is agreed upon, the impact of Britain leaving the EU is monumental and will have a negative impact on Sterling. To combat this risk, we recommend buying a put contract on the FXB ETF.

FXB is an ETF that delivers exposure to the value of the Sterling relative to the U.S. dollar. As Sterling decreases the price decreases. The closing price on March 4th was $127.48. We recommend a short position with a strike price of $120.00. As we can see in the chart below, using the Option Profit Calculator, the upside is reflected in green and losses in red. By utilizing a short position, the potential for losses is minimal while the upside shows significant gains. The maximum risk is $55 while the maximum return is $11,945. If a deal is made or the deadline extended, Sterling could make a rebound so a price of $120 appears to be reasonable (current price=127.48). The risk is low since it is unlikely that Britain would leave the EU without a deal.

Recent events indicate that a deal is on the horizon. Theresa May is in Brussels the first week of March to try to negotiate with the EU. The British Parliament will vote on March 12-14 each day in order to come to an agreement to meet the March 29th deadline. The vote on March 14 will be for an extension if no agreement can be made. There are signs that members in Parliament might be more willing to negotiate. Graham Brady, the pro-Brexit leader stated that the “country is tired of vacillation and delay.” Brady called on his colleagues to “pull together behind the prime minister and help her to deliver our exit from the European Union on March 29.” 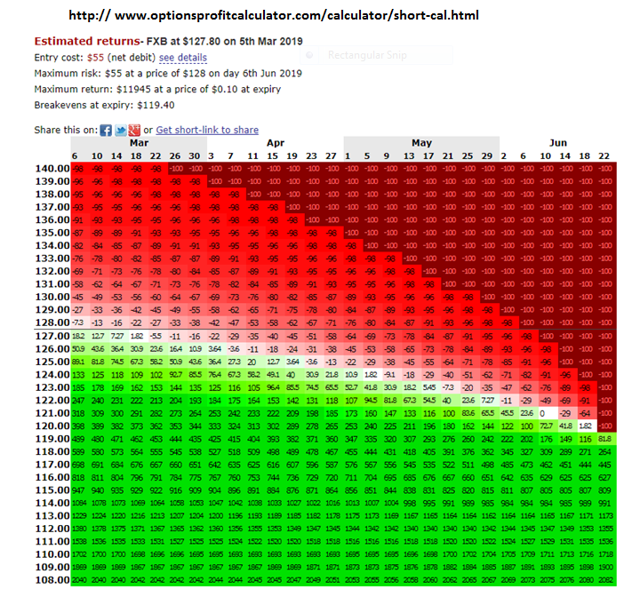 Depreciation of Sterling due to political turmoil

As the deadline approaches and tension escalates over the Northern Ireland border, a “no-deal” exit is more likely. In 1998, the “Good Friday” agreement brought resolution to a long history of violence between Northern (part of Great Britain) and the Southern (sovereign Ireland). If Great Britain leaves the EU without an agreement, the border will become an issue and many fear the violence will return. Leaving the EU is also a divisive issue in Britain. The referendum was passed on June 23rd 2016 by 51.9% and has been an issue that has split the country. Daily protests occur in London with supporters from both sides. Even if a deal is agreed to Great Britain’s decision to leave the EU will cause a disruption in the global market which will cause the value of Sterling to decline. Although, leaving the EU with a deal will not be as impactful, the logistics of Great Britain leaving the EU are monumental.

Depreciation of Sterling due to economic turmoil

In addition to the political turmoil, our prediction is further strengthened by the fact that UK economic growth slowed sharply at the end of 2018. The British economy grew at .2% in the Q4 2018 which is lowest the UK has experienced since 2012.

On February 18th, Honda announced it plans to leave Britain as global forces reshape the car industry and the country prepares to exit the European Union. Honda will close its plant in Swindon, England, which employs 3,500 workers, by 2021. Nissan also announced in early February that it would be producing the next generation of its SUV in Japan, rather than at its factory in Sunderland, England. Companies are leaving Great Britain and pursuing other options as Brexit is becoming a reality.

Although the global growth rates are expected to decline in 2019, the UK is already seeing dramatic declines. Trade also declined in anticipation of tariffs and additional requirements that will be mandated under Brexit. The Bank of England’s first monetary policy update was released in February which stated it will leave interest rates unchanged. The central bank stated that a continued, gradual tightening of monetary policy was necessary given its forecast for inflation. It also warned of various factors weighing on the U.K. economy. The benchmark interest rate remained unchanged at 0.75%. Declines in global economic growth, the impact of trade tariffs and uncertainties surrounding Brexit will weigh on the U.K. economy, “UK economic growth slowed in late 2018 and appears to have weakened further in early 2019,” said the central bank.

The Bank of England’s policy regarding interest rates is almost identical to the Federal Reserve. In January the Federal Reserve left its benchmark interest rate unchanged. What surprised U.S. markets was the indication that rates of 2.25% percent to 2.5% may stay in place for some time. The relief in no interest rate hikes will not benefit Sterling since the U.S. has embraced the same policy. These monetary policies further our position to take a short position in Sterling. The U.S. stock market had significant gains in January and the unemployment rate remains low. These positive economic indicators are contributing to recent gains in the value of the U.S. dollar.

Leaving the European Union would mean that the trade agreements between the U.K. and the EU will become void. They will have to negotiate separate deals. These deals are not easily agreed to and can take a significant amount of time. An example is the current trade deal with the U.S. and China. These negotiations have dragged on for months are still unresolved and like Brexit have an upcoming March deadline.

The U.K. has proposed it would likely revert to tariffs set by the World Trade Organization (WTO). This will be automatic if no deal is made. Britain is already a member of the WTO and this fails safe option will provide structure if Britain leaves the EU. The tariffs are higher than ones currently in place. Lower trade volumes would most likely be the result as well as backlogs at European ports that will require customs formalities, not to mention increase costs for U.K. consumers.

Below is a graph that shows the activity in certain sectors from Q42014 to Q42018. The referendum was passed in June 2016 and Great Britain had a solid Q4 but sharp declines occurred in 2017. GDP was growing at a slow pace and showed significant growth in Q3 2018 but as political turmoil intensified over Brexit growth declined. The economic environment has been volatile and has not been able to recover to pre-Brexit levels. 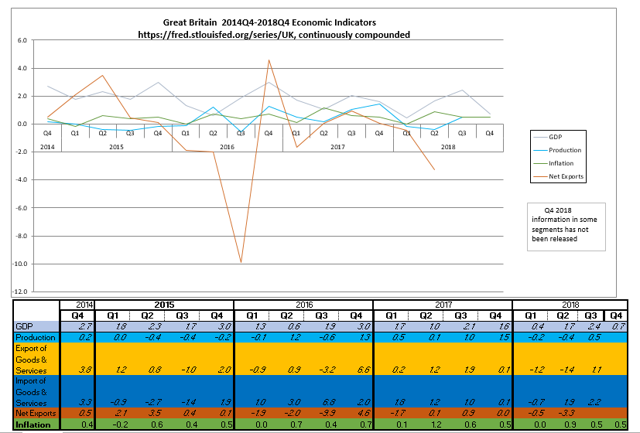 Brexit will make it more costly to transact business in the U.K. Stocks in the UK have been underperforming and the risk premium for U.K. firms has risen by .9 percentage points since the referendum in 2016. The risk premiums for Euro Stoxx and S&P 500 indexes have declined by 1.2 and 1.7%. European rules give preference to EU government and bank debt held by insurers and banks. If Britain leaves the EU, these institutions will have to hold more capital against U.K. bank bonds. As a result, these institutions, which hold about 15% of U.K. bank bonds, will demand higher returns, increasing the banks’ cost of funding. This increase will be passed on to the consumers who will incur a higher cost of borrowing.

Great Britain faces many economic and political challenges in the upcoming months, but the financial impact has already been significant and will take years to recover. Gains in the U.S. stock market as well as record unemployment and low inflation have strengthened the dollar. These factors support taking a short position in the ETF FXB.

What Willingness INUS The Next Recessions – Mishell On Risktaker

Why VWAP Is So Important for Traders...

8 Stocks May Jump on Takeovers as...