I have very much been looking forward to writing this article. Since my last article about gold miners (GDX) in February, a lot has changed. Fortunately, all key indicators that I discussed have further strengthened (at least from a bullish GDX standpoint). With that said, I remain very bullish on gold miners and think we are looking at a longer-term uptrend. In this article, I will update my previous article and tell you why I am going to buy gold miners and expect gold to gain a lot of momentum.

The Big Picture Is Key

First of all, let me once again say that being a commodity bull has been incredibly tough over the past few years. Since 2011, we have not been in a market that was favorable towards commodities in general. One of the reasons is the massive capital flow towards the US and the US dollar (can’t have one without the other).

I borrowed the graph below from a trader I highly respect with regards to commodities. It shows the difference between the 3 months US treasuries and 30 year German bunds. It works for other bonds as well. For example, 2 year US treasury yields minus 2 year German treasury yields, or bonds from other countries. What we see is a strong capital flow towards the US since the end of the recession. Along with that, the US stock market outperformed its foreign ‘peers’ and the US consumer became stronger than ever. As a result, US consumer cyclicals were one of the best trades since the recession with the consumer cyclicals ETF (XLY) returning more than 600% since the recession. 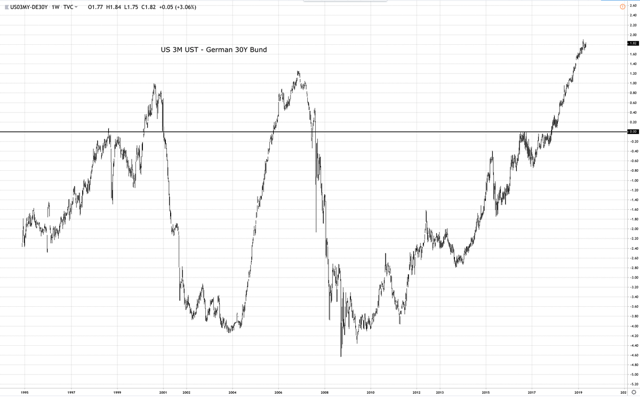 Consumer cyclicals not only outperformed because if the strengthening economy, but also because inflation has never been that big of a deal. Simply because commodities did not do well.

At this point, we are seeing signs that this massive long-term trend is changing. And that is exactly why gold has the potential to become a must-own commodity again.

The Trend Is Changing

Trends do not change without a reason. That’s why we need a trigger, something that could change the trend I just discussed. And I think that the signs of a trend reversal since my last article are getting stronger.

The first sign has to do with the fact that leading economic indicators like the ISM manufacturing index continues to point towards weakness. The ISM index came in at 52.1 in May which is still above the neutral level of 50.0, but much lower compared to the highs of 2018. 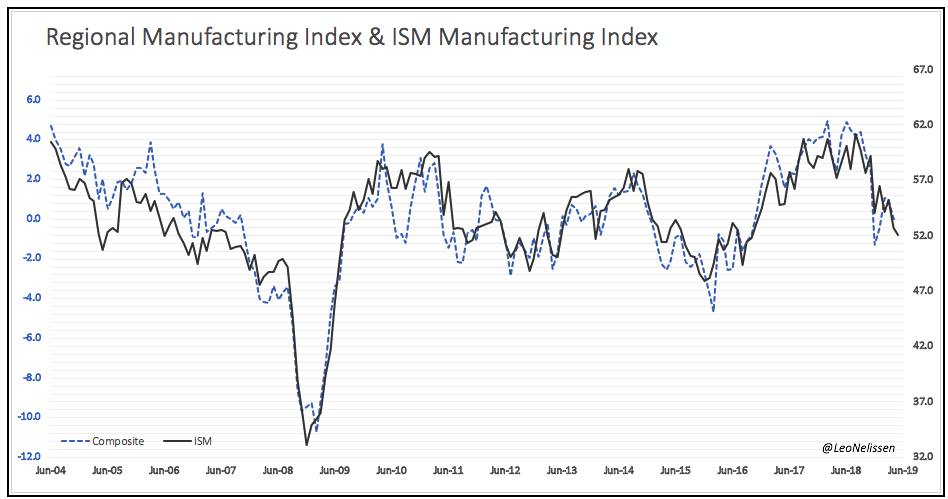 The same goes for the Euro Area as well where growth has been well below the 50 level since February of this year.

Normally, a growth slowing trend like this would push money towards the US dollar. Not only because the dollar is a safe haven but also because major parts of the dollar index (Euro Area and Great Britain for example) are in a much worse shape than the US (both on an economic and political level).

But guess what: it’s not happening this time. The USD index continues to go sideways since 2015. It is truly remarkable that the index has not gone higher over the past weeks with risks in Europe and the rest of the world starting to grow. The USD has even started to weaken: 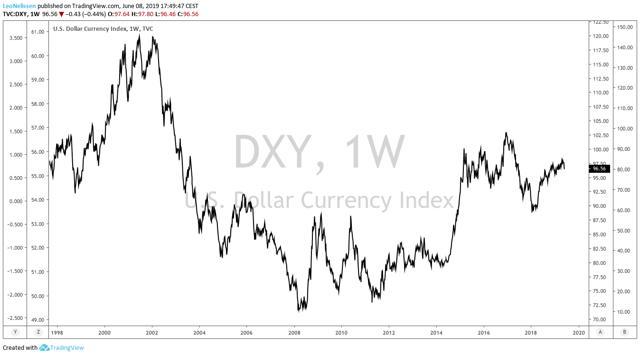 One of the reasons is that rates in the US are too high. The Fed has not yet cut rates but market expectations are that the Fed is starting a new easing cycle.

The US 2-year yield is now below the federal funds rate which indicates that the market is currently pricing in at least 2 rate cuts. That’s the current number which could easily increase given that 2-year yield peaks never resulted in just a short-term reaction from the Fed. These turning points always point to longer-term trends which, in this case, means that a easing cycle is likely.

The graph below is related to the one above and shows the difference between the US 2-year yield and the federal funds rate. Every steep drop like the current has led to something bad. Both in the early 2000s and 2008, the economy started to weaken and commodities had a few good years. The bull market starting in the early 2000s, for example, was one of the strongest commodity bull markets so far. 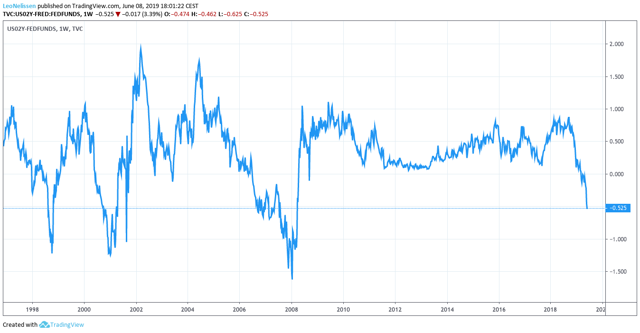 It also helps that asset managers are still very bullish on the US dollar as you can see below. Net positions are close to their multi-year highs even though the pressure on the currency is rising. It is starting to look like a 2016-ish event where gold started to show the first signs of life after the dollar started to drop at the end of 2015.

All things considered, the bull case for gold has massively strengthened. We are seeing USD weakness as economically underperforming regions are not able to push the USD up. Additionally, we are at the end of a hiking cycle with at least 2 implied rate cuts in the mid term. And even though it is hard to say how many cuts will follow, it is likely that we are in for more than 2 cuts in the longer term.

I expect asset managers to start selling USD in the mid term which will continue to boost gold, which is just now starting to rebound from the lows. Personally, I am going to buy the gold miners ETF (GDX). As I mentioned in this article, gold mining stocks are outperforming the price of gold during uptrends. Moreover, it takes away the need to analyze single mining stocks. Personally, I do buy single stocks in multiple segments, but I have increasingly started to focus on ETFs in both the gold and biotech segments.

With that said, I think GDX has room to go to $30 over the next 12 months if the bull case is right.

The entire uptrend will be supported by higher gold prices. I think gold will gain a ton of momentum once it breaks $1400. That would confirm the uptrend and finish the bottoming process of the past few years.

Disclosure: I/we have no positions in any stocks mentioned, but may initiate a long position in GDX over the next 72 hours. I wrote this article myself, and it expresses my own opinions. I am not receiving compensation for it (other than from Seeking Alpha). I have no business relationship with any company whose stock is mentioned in this article.

Additional disclosure: This article serves the sole purpose of adding value to the research process. Always take care of your own risk management and asset allocation.

State of the Markets and Rebalancing Your Portfolio