Since my recommendation in May to purchase the shares of the VanEck Vectors Oil Refiners ETF (CRAK), shares have slightly increased by about 5%. In this article, I am going to give an update to the thesis I expounded in the previous article and share why I’m even more bullish on refineries and why I believe the price of the CRAK ETF is headed higher in the immediate future.

First and foremost, let’s do a refresher of what CRAK actually is. When you buy any sort of fund, you really need to look under the hood and figure out exactly what it is you’re buying. In the case of CRAK, it bills itself as an ETF which gives exposure to the oil refining sector.

Specifically, if you look into the methodology, you will find that CRAK replicates the MVIS Global Oil Refiners Index which gives broad exposure to the refining industry. If you look through the holdings sheet, you’ll see that not only is the exposure broad, but it is also global in scope. 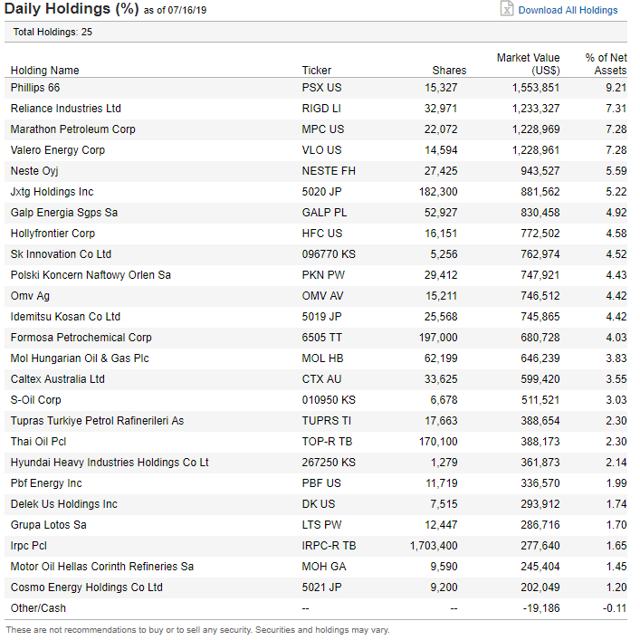 However, if you group the companies by region and market cap, you’ll find that the largest slice of exposure is in the North American refining market. This means that if we analyze the United States refining sector, we can get a pretty good idea as per where the core holdings of the ETF are likely headed in the future and through exploring the connections between global and domestic markets, we can generate a holistic recommendation for CRAK.

When it comes to analyzing the refining industry, most of the fundamental story is really contained in two markets: gasoline and distillate. As seen in the following chart of refining yields in North America, these two commodities account for the strong majority of output from a refinery and understanding these variables gives us a great starting point to understand what will drive the typical refinery. 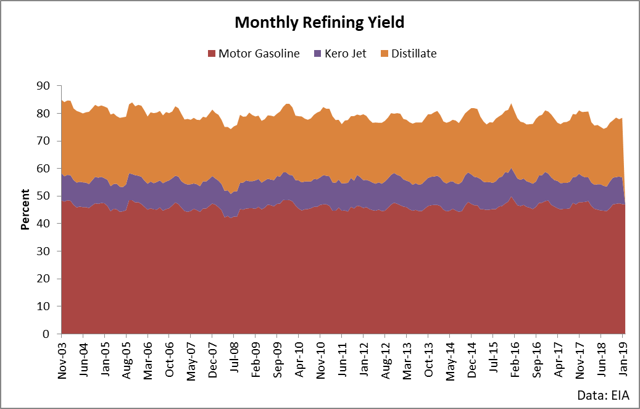 Let’s start with an examination of gasoline markets. If you’ve kept up with the news or read any of my recent articles covering the refining sector, you’ll likely be aware that gasoline stocks are in a strong decline in North America. As seen from the year-to-date balance perspective, gasoline inventories have fallen to the fourth lowest to-date draw ever seen in the weekly data. 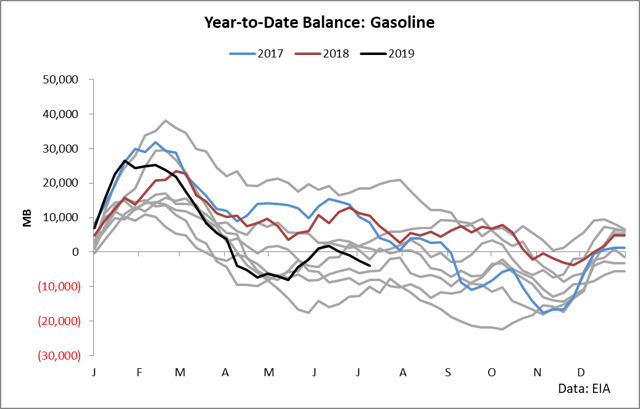 The story of gasoline this year has been quite turbulent as seen in the following 5-year range chart. 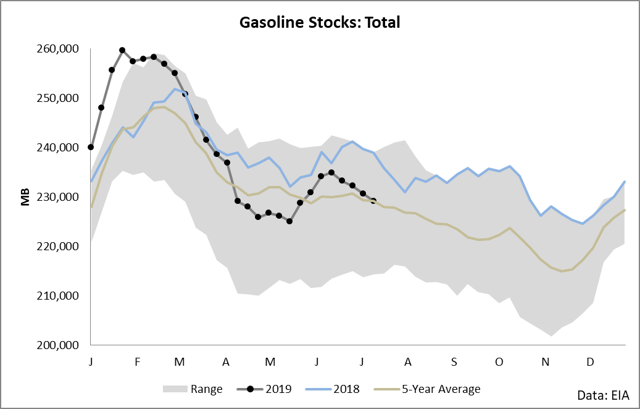 We started the year with the strongest builds ever seen which led to the gas crack falling across all major regions (Gulf Coast, Los Angeles, and New York Harbor) to be either at or near the 5-year low. 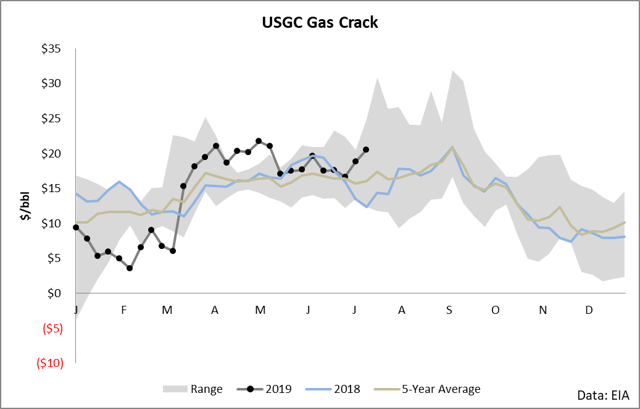 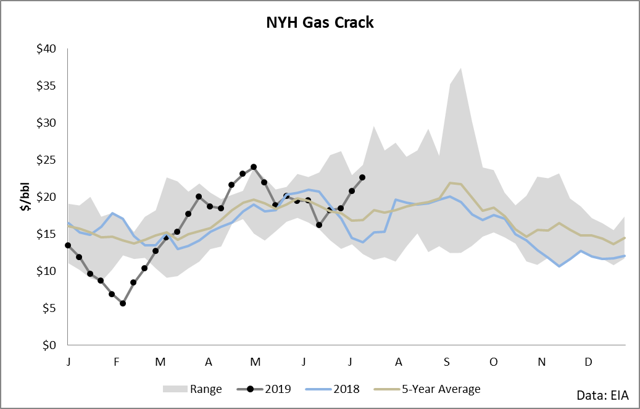 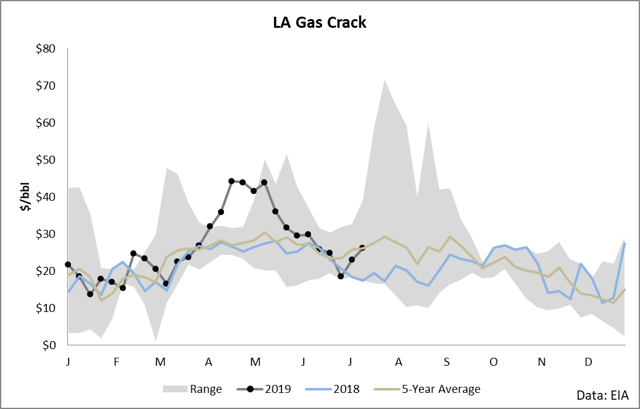 Immediately after this build, demand came in strong and inventories collapsed to be under the 5-year average within three months in a pull which ended up pushing gas cracks to multi-year highs. 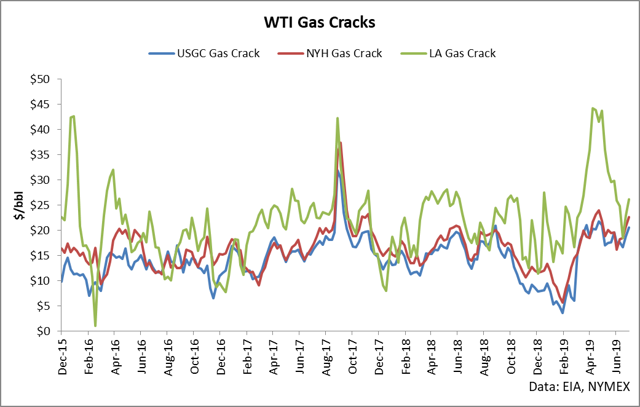 Around May, inventories swung once again above the 5-year average as imports were reported at some of the highest levels ever seen – both seasonally and on an absolute basis. 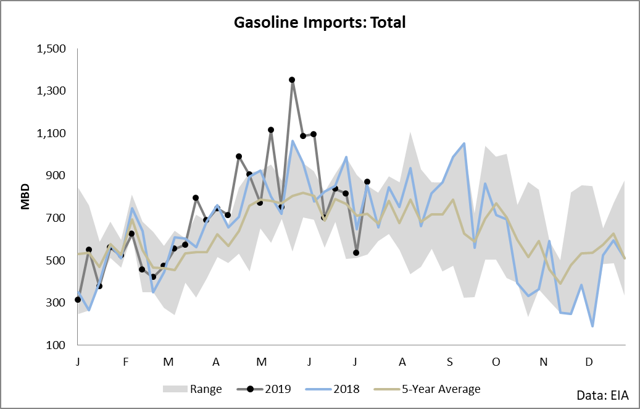 The current story of gasoline is this: demand is decently strong with product supplied remaining near 5-year highs. 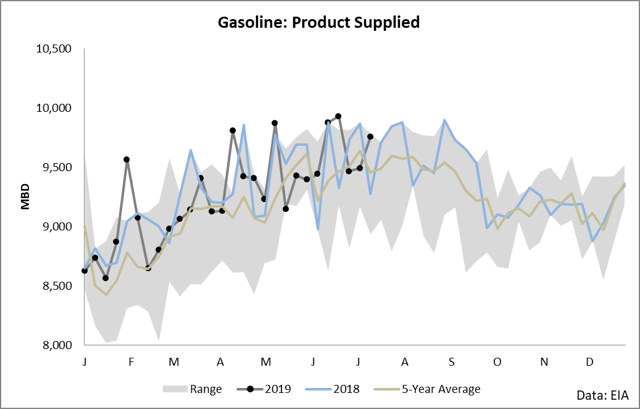 With this strong demand, we have seen weak supply and significant supply disruptions in the form of a refinery explosion along the East Coast. A simple look at PADD 1 utilization shows the picture as per how dire the straits are along the East Coast at this moment. 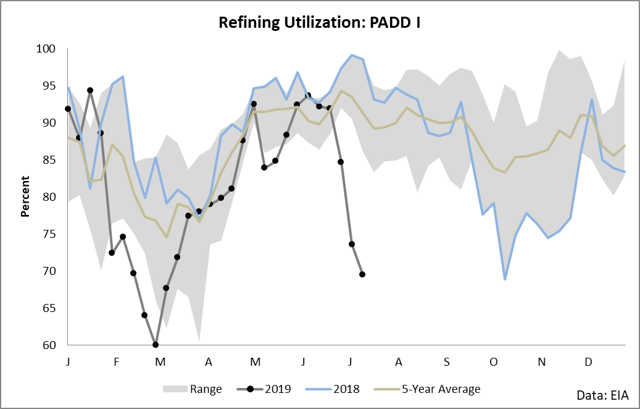 Putting all of these pieces together, here’s what we can say about gasoline:

The market currently gives a strong “buy” signal for gasoline and the recent explosion at PES really adds fuel to the fire, so to speak. This situation is reflected into the crack which means that a large share of the refineries represented by the CRAK ETF is exposed to a bullish commodity. I believe this bullishness will remain at least through the end of summer driving season with the only significant swing factor being something like a recession appearing. Barring that possibility (which I view as not remote), gasoline remains bullish and gasoline earnings should be strong for refineries.

The other large component of refining earnings is distillate. While not as large in terms of yield as gasoline, it still remains significant and understanding the fundamentals of the commodity will give us good guidance as per where its price could be headed.

First and foremost, distillate has actually had a moderately bullish year for most of the year with stocks below the 5-year average. 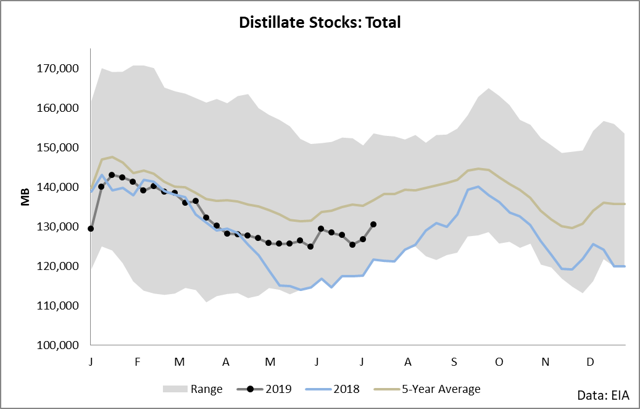 The basic reason for this general bullishness has been weaker imports with near-high exports. 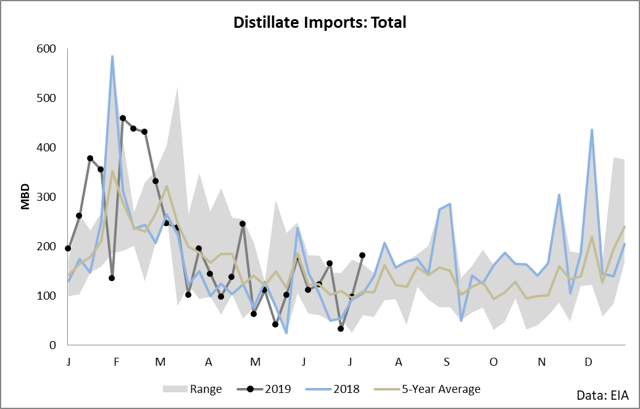 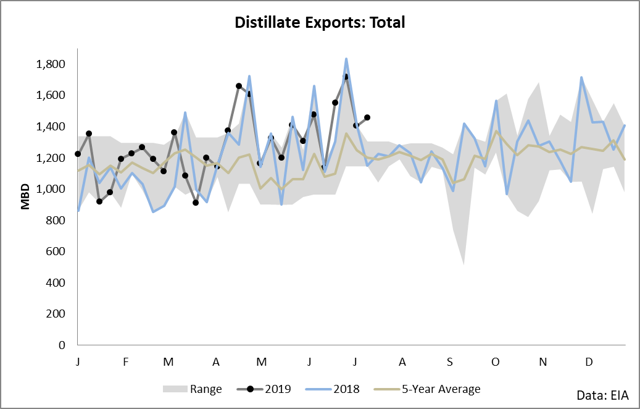 This situation of strong exports comes despite the fact that we have cracks solidly above the averages of 2016-2018. 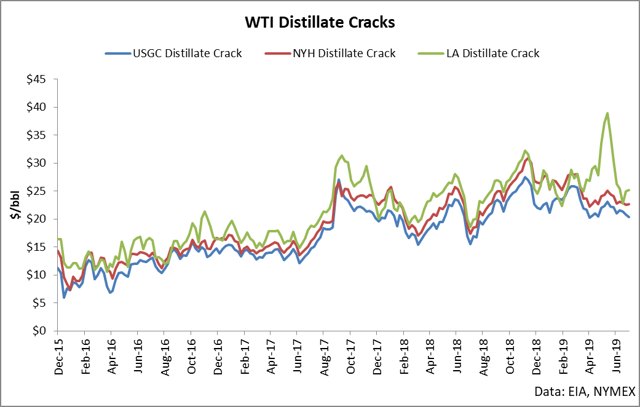 This basically means that global prices are better than domestic prices and United States barrels are finding more attractive homes in other countries. This is a benefit for refineries since distillate is attractive both at home and abroad and is bullish on the commodity. Similar to gasoline, I expect this net benefit to remain at least until summer driving season ends (2 months from now) at which point we should reevaluate to see if our assumptions of strong global pricing continue to hold. Until then, distillate is bullish as seen by flows being redirected despite strong distillate cracks in the domestic market.

CRAK also holds a not-insignificant share of global refineries. Rather than doing an exhaustive fundamental analysis of every single country represented (with data that doesn’t exist for the most part), we can draw some high level conclusions as per the state of global refining.

In conclusion, CRAK is a good buy at least for the next 2-3 months, at which point we need to reassess the impact of summer driving season and the global economy. Until then, I’d stay long the ETF and let your profits continue to ride.

Trade wars are the number one risk to the global economy, warns IMF

India stocks lower at close of trade; Nifty 50 down 0.78% By Investing.com